A hive of honey bees 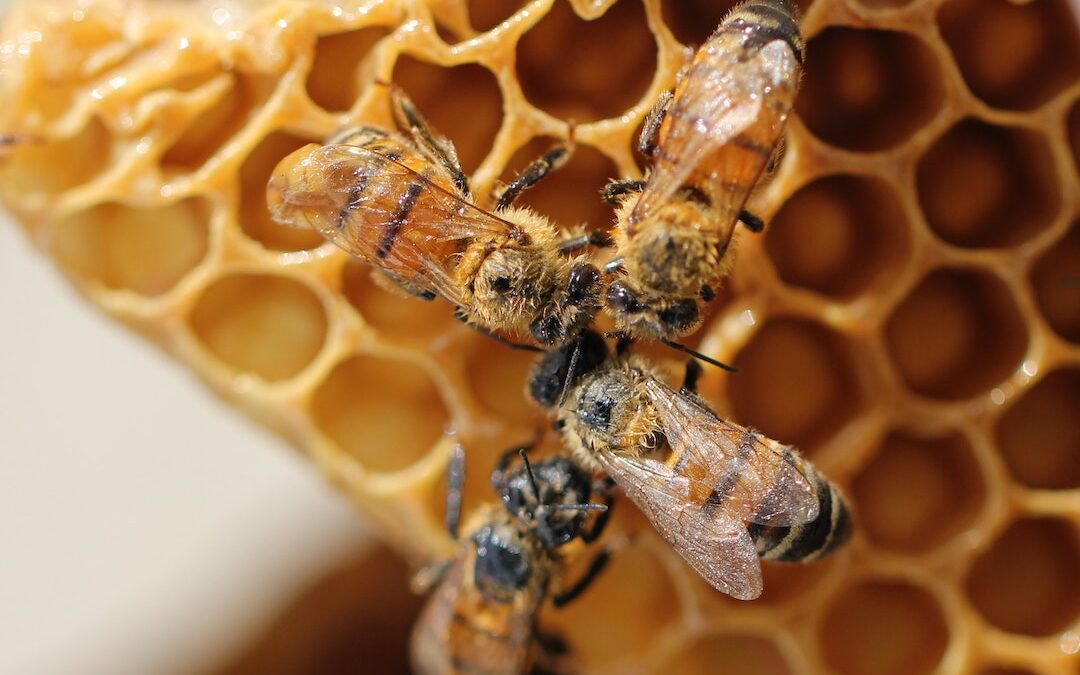 Crucial pollinating machines and champions of the food chain, Bees bring more to our table than honey.

The honey and beeswax they produce and the pollination services they provide are worth billions to Australian agriculture. But more importantly, life as we know it would be impossible without honey bees.

As humans have spread out across the globe to populate every continent except Antarctica, they have brought their animals, large and small. Of these species’ introductions, none have been more successful than the western (or European) honey bee (Apis mellifera). First brought into Australia in 1822 to aid in the pollination of the colonists’ European crops and pastures, beekeeping is an important rural industry and the pollination services it provides are even more vital than they were nearly 200 years ago.

Amateur and commercial beekeepers in every state and Territory, except Tasmania, are required by law to register their hives. According to Australian Honey Bee Industry Council (AHBIC) executive director Trevor Weatherhead AM, there are 24,000 beekeepers in Australia and more than 647,000 hives, which produce around 20,000 tonnes
of honey annually.

The ABARES Australian honey bee industry 2014–15 survey results estimated the gross value of production at $101 million. The report found that, “on average, Australian beekeepers sold around 53 per cent of their honey to major processors in 2014–15. Around 17 per cent was sold to other processors, while the remainder was sold direct to retail (12 per cent), local markets (10 per cent) and door sales (6 per cent). Average sales of honey directly to export were minimal (0.5 per cent).

“This pattern was similar for all states except Tasmania, where a larger proportion of beekeepers sold honey to other processers and directly to retail (34 per cent and 33 per cent, respectively), and 8 per cent sold honey direct to export.”

Around 14 per cent, or 4,600 tonnes, of honey gets exported, according to the ABARES report. Weatherhead, however, says it is exported as a packaged, finished product by processors rather than in bulk. “There is demand for our honey overseas, but price is a big factor — our honey is expensive compared to the world price,” he says. “Ironically, we import honey from China, but there is a big demand in China for food produced outside the country because of our clean, green image and our more stringent quality assurance procedures.”

While honey is the most important bee product by far, beekeepers also sell beeswax, royal jelly, pollen and propolis — a resinous substance used by bees to repair and varnish honeycombs. Live queen bees and packaged bees are also sold to Canada, the Middle East, Pakistan and Japan. “There’s a good market in the Northern Hemisphere as we can supply bees at the start of their season. They’re able to use imported Australian queens to split hives, and packaged bees to make good any losses they may have suffered over winter,” says Weatherhead.

While it ranks behind honey, pollination services and live bee sales in terms of income for beekeepers, Australian beeswax has surged in popularity and price in recent years, according to Weatherhead and beeswax candle-maker and owner of Queen B, Cate Burton. “There has been a 300 per cent increase in the price of Australian beeswax in recent years,” says Burton. “Australia doesn’t have Varroa mite (Varroa destructor), so our beeswax is free of the chemical miticides that beeswax everywhere else in the world has. This makes it very popular with pharmaceutical companies making hormone replacement therapy products, and cosmetic companies who use it in hand cream, lipstick, lip balm etc.”

While honey is the main product of bees, in recent years more and more attention has been focused on the role bees play in pollinating the plants that are so vital to our planet, known as ‘pollination services’ in economic-speak. Modern industrial agriculture is increasingly dependent on beekeepers trucking thousands of hives around the country every year. Due to land clearing and the resulting loss of biodiversity, cherries, apples and pears, almonds and macadamias all need additional bees to pollinate the crops at the appropriate time of the year. According to Weatherhead, 200,000 beehives were needed to pollinate last year’s almond crops in Victoria, New South Wales and South Australia.

And it’s not just tree crops that need bees for pollination. Strawberries, cucurbits, carrots and onions all need bees to pollinate the next crops, as do canola and sunflowers.
A study by Curtin University’s John M Karasinski found that 53 crops rely on honey bees for pollination to some extent, while the economic value of Australian-managed and wild honey bee pollinators is estimated to range between $8.35 billion and $19.97 billion, depending on fluctuations in the farmgate value of the crops they pollinated.

Whatever the actual value of pollination services, what we can be certain of is that a world without bees would be a very bleak one. Activists painted this unsettling picture several years ago when a phenomenon known as Colony Collapse Disorder (CCD) occurred in the United States that saw entire beehives die off. According to Weatherhead, CCD is caused by multiple factors, with Varroa mite being the major culprit, along with starvation. Environmentalists point the finger at a group of insecticides known as neonicotinoids, which are extremely persistent in the environment. So harmful, the European Union is convinced enough of their impact on bees and other pollinators to ban their use, despite legal challenges by chemical companies such as Bayer and Syngenta.

Knowledge of CCD and neonicotinoids teamed with the spectre of a world without bees has led to a massive upsurge in amateur beekeeping in both urban and rural environments. According to the now-retired NSW Amateur Beekeeping Association (ABA) president Bruce White OAM, “the ABA in 1968 had six branches, in 1988 seven branches, in 1991 eight branches, in 2018, 21 branches; and membership has grown from 706 in 2014 to 1680 in 2018.” Bruce has since been replaced by Sheila Stokes.

This interest has been driven by the media and popular TV programs such as ABC’s Gardening Australia, which have publicised the world decline in bee populations and the magnitude of the threat to world food security. “Up to 65 per cent of all the food we eat depends on pollination, with honey bees the main pollinators,” says White.

The invention of the Flow Hive, a new type of easy-to-use beehive, has also played a part. Weatherhead welcomes the growth in amateur beekeeping, but also cautions that making sure Australia continues to be Varroa mite-free is the best way of ensuring our bee population remains healthy. This will be a big ask as the eastern (or Asian) honey bee (Apis cerana) is the natural host for Varroa mite, but it’s a threat government and the community are taking seriously so far.

“It’s absolutely crucial that we keep Varroa out of Australia,” says Weatherhead. “We’ve been running education programs, including education of wharfies, and there’s the National Bee Pest Surveillance Program which is being run by Plant Health Australia (PHA).”

Perhaps, ultimately, the best thing Australian bees have going for them is our beekeepers. Burton has been making beeswax candles for more than 20 years and has travelled all over the world visiting beekeepers. “No Australian beekeeper — even those doing pollination services and trucking their hives around the country — will shut their bees up for more than 24 hours,” she says. “They refer to the bees as ‘their girls’, and they just have much higher standards of animal husbandry than in other countries.”