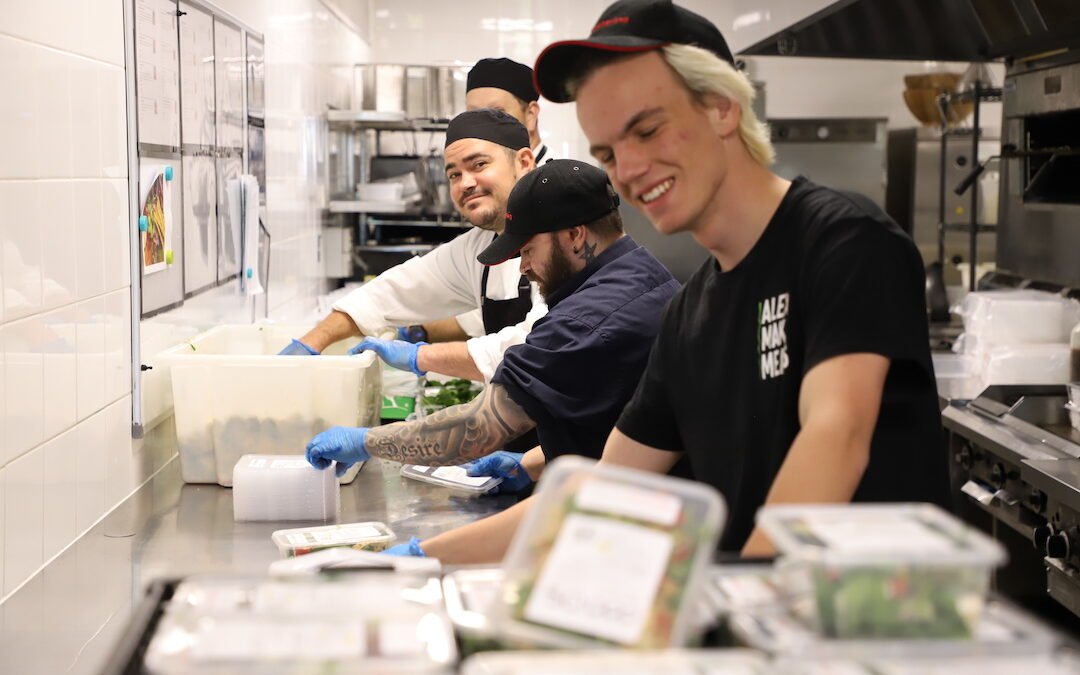 People like Alex Dekker don’t come around very often. When the world descends into chaos – like it did at the beginning of 2020 when COVID-19 first emerged – most of us revert to survival mode. We drop everything to keep ourselves and our loved ones safe. But every now and again, an individual comes along whose field of care goes beyond that of their closest connections and extends to the far reaches of society, touching those who are truly in need of help.

Until March 2020, Alex was on the path to becoming a Global Studies graduate, majoring in International Studies with a bonus chemistry degree on the side, until a single tray of lasagne sent him toward a completely different but far more rewarding course.

In a nutshell, what is Alex Makes Meals about?

We make sure that the most vulnerable people in our society have something wholesome, filling and tasty to eat. This goes beyond simply meeting nutritional requirements. Food is such an important part of our lives. It’s a ways for us to connect with and care for eachother, and if we’re just serving bland, tasteless meals to people who are seeking comfort and fulfillment, it can take a real toll on their dignity. So, we provide meals that we would be proud to serve to our friends and family. And thanks to ongoing support from the community, we are able to provide more than 3,000 meals every week to people in need.

What was pre-COVID Alex Dekker doing?

Before the pandemic hit, I was at uni completing a degree in Global Studies with a major in International Relations. I always had a bit of an ethical struggle with it though. One of the biggest critiques about international relations, as opposed to international studies, is that it’s amoral at its core. It focuses on the movement of giant powers but it always neglects the human. This is what frustrated me so much about my degree and became even more heightened as the world was falling into despair amid the COVID outbreak.

What was the turning point for you to drop uni and go full steam ahead with Alex Makes Meals?

When COVID-19 began and it became clear that the underprivileged people in our community where going to suffer immensely, I began talking to them and hearing about their experiences. I was shocked by the standards at which their needs were being served. I thought “Oh damn, we are failing these people.”

Historically, there has been a lot of fear around talking to the underprivileged members of our society. I think guilt plays a big role in this. We don’t understand them or what they need and as a result, we either patronise them, or worse, ignore them. The conversations I was having as I served these incredibly diverse individuals made me realise something needed to change. When I thought about my uni degree, I realised that I could help a lot more people through Alex Makes Meals than I could in any other capacity.

Did you always have a passion for cooking?

No more than your average Joe. Obviously I’ve now spent a lot of time in the kitchen with som really talented chefs and luckily some of their skills have rubbed off on me, but before that, I was a pretty ordinary cook. And my lasagne was just above average. I honestly stumbled upon this, but it seems like we’re doing some good work, so I think I’ll stay in the kitchen for a while.

How is Alex makes Meals different to other food charities?

We truly value the people receiving our food. The reason we cook meals to such a high calibre is not just because of the physical impact it has, but the emotional, too. We serve the same food to our volunteers as we do to our community members because the operation that we run has very real benefits for people on both sides of the counter. We want everyone to feel connected, respected and satisfied.

What kind of meals does the team dish up?

After a year and a half of testing and troubleshooting, we managed to nail about six different recipes that we use on a rotating basis. The trick is finding the sweet spot between high quality and high volume. Some of my favourite are, no surprises here, our infamous lasagne. We also do a great roasted cauliflower pilaf and a delicious sticky friend rice.

What support have you received from the community?

We wouldn’t be able to achieve the volume of food we have without support from a few commercial kitchens around the city of Melbourne. We currently have access to a catering kitchen in Port Melbourne and Preston which helps us pump out thousands of meals every week.

We’ve also just partnered up with an ethical fresh produce supplier who sells goods to us for far less than cost price. The fruit and veg that we receive may be too big, too small or slightly out of shape to meet the supermarket standards – but when you’re cooking at such a high volume, a supersized carrot isn’t a bad thing!

We’ve crafted this important partnership because we, as an organisation, don’t take donations for fresh produce. We cant guarantee the quality or reliability. We might have a great week and provide an awesome service to our community, but the following week, our standard drops and we leave people feeling disappointed and dissatisfied. That’s why these ongoing partnerships are so vital to the process.

On an individual level, we’ve had so much support from local volunteering groups, schools and the general community. I’ve had the opportunity to speak all over the city, sharing what we do and encouraging people to get involved. Thats the only reason we still exist – people generally do want to help. They just don’t always knwo how.

How can people get involved?

Currently, we rely entirely on public donations but the smallest amount can make a huge difference. Just $15 can feed one person one meal a day for an entire month.  We have just launched the Founders Club, an initiative that allows donors to be in the driver’s seat of change. The Founders Club allows you to set up automatic monthly donations with 100 per cent of all donations going towards the meals and their distribution. We’re keen to see more people come on board and help our cause in this way!

Peer fundraising is also something we’re exploring. We’ve had people run marathons in support of us and even dedicate Facebook birthday fundraisers to us. Just having people become aware of the problem and do even the smallest thing to try and improve it is fundamental in changing the mindset that the underprivileged are responsible for or deserve to be in the situation they’re in.

What is next for Alex Makes Meals?

As much as we are making a huge difference in the local community, the problem is widespread. In Melbourne alone, we are currently 30,000 meals per week short of what we want to be providing. And that number is purely based on the people who know what we are doing and have requested more. If that demand exists in Melbourne, of all places, you know it exists nationally.

We would love to establish additional satellite kitchens in other states, but the logistic behind any large-scale expansion would be tricky. Luckily, we have some wonderful people on our side who have been working in this field for decades. And while the Government has been putting a lot of money into food relief, the quality is low. We would need to see significant investment in expanding community kitchens in order to serve the needs of the community. It’s a challenge that we’re willing to take on, and we’re sure people around AUstralia are happy to support.

To find out more about Alex Makes Meals or pledge a donation, visit alexmakesmeals.com