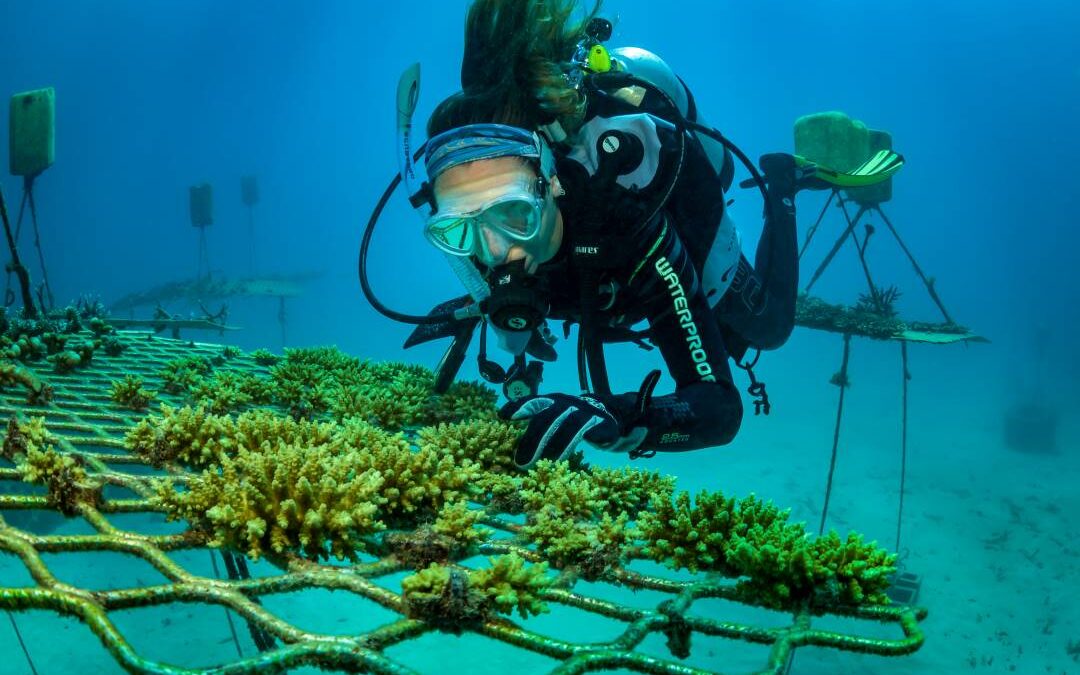 Reef sharks, shrimps, octopuses, dazzling varieties of corals and fish… such sights would normally be scuba-diving highlights on the Great Barrier Reef. But not tonight – this isn’t just any dive on a coral reef. This is spawning night, one of those few, special nights of the year it snows underwater.

Often likened to a submarine snowstorm, mass coral spawning is the spectacular, simultaneous release of egg-and-sperm bundles by an entire reef of corals. It only happens over a handful of nights once a year – and only when conditions are just right.
“In late spring and early summer we get warming water which seems to stimulate the maturation of the eggs and sperm inside the coral,” explains Professor Peter Harrison, an Australian scientist who was one of the original discoverers of coral spawning, in 1981.

“Then they usually spawn four to six nights after a full moon, which coincides with periods of slack water that increase fertilisation rates. Spawning after dark means all these fat-filled energy rich food sources [coral egg and sperm] are only seen by a few nocturnal predators, not by the major daytime predators.”

It’s five nights past November’s full moon. We’ve just spent a few hours motoring 55km out to sea from Marlin Marina, Cairns, aboard Tusa Dive’s vessel Tusa T6. Moored at Coral Gardens dive site on Saxon Reef, the placid sea contrasts with a busy deck bustling with a mixture of tourist divers and snorkellers gearing up, all eager to witness the annual miracle.

Water temperature is an inviting 27°C, warm enough for almost everyone to forgo wetsuits. Even so, we’re all in stinger suits, a standard November to May precaution. It’s reassuring, however, to hear stinging jellyfish are a coastal menace not usually encountered on these outer reefs.

Descending into semi-darkness down the anchor line in small groups, we find the bottom readily visible 10 metres below in the dim glow of boat lights and our dive leader’s torch (we all carry one). The extensive coral beds and bommies are glorious, but we’re a bit early for the full majesty. It’s not until the second dive – after a hot meal back on board – that we see some spawning action. Floating upwards from a carpet of staghorn coral, hundreds of white dots ascend through dark waters as if pulled by invisible strings. Later that night, countless more will join them.

“It’s incredibly beautiful underwater when you see this underwater snowstorm; all these eggs and sperm lifting off the corals and floating gently away in the current,” says Peter.

As spawning peaks, the waves roll with a pink, oily coating of floating spawn. Upon surfacing, the egg-and-sperm bundles break up and mass fertilisation begins. A few days later, millions of miniscule newborn coral larvae sink to the bottom and attach to reef substrate. Feeding and growing, they keep the coral life cycle ticking over.

Amid this outpouring of new life in colourful coral-filed waters, the threats facing the Great Barrier Reef seem deceptively remote. How does one reconcile the global media reports of its death after the 2016-2017 mass bleachings with the mass breeding taking place all around us?

“The Great Barrier Reef is certainly not dead,” Peter says. “But it was significantly damaged by those bleaching events. The greatest impact was in the northern parts, but some central parts were also badly hit. Some reefs are badly affected with very few corals left. Many reefs were significantly impacted but patches of coral remain. And other reef systems that were protected by upwelling of cooler water still have very good coral cover. What we need to do now is use surviving corals as the foundation for breeding the next generation. This will help coral communities recover more rapidly.”

Discovering coral spawning opened a way for Peter – who has made reef recovery his life’s work – to do just that. Since the 1980s, he’s been refining techniques for gathering large volumes of larvae spawned from coral that resisted bleaching temperatures, then releasing them to repopulate damaged areas.

His latest innovation involves fortifying larvae with special algae to help bleach-proof them even more. Bleaching is a stress reaction from the loss – in overheated conditions – of the nutrient-supplying algae in a coral’s tissues. Normally corals can recover, but extreme heatwaves brought by global warming could turn bleaching into a death sentence for reefs everywhere.

Luckily, however, not all algae overheats at identical temperatures. The process involves taking a strain better able to handle the heat than other types of seawater coral. Then, Peter mixes it with larvae in tubs before settling them on a reef. This ensures they start out better armed against their sea of troubles.

“Combining heat-tolerant algae with larvae from corals that have survived the previous bleaching event is likely to provide extra capacity for the new juvenile corals to survive heat stress in the future,” he says.

Even so, Peter warns that future global warming scenarios could still take coral beyond this enhanced tolerance threshold. “What we’re trying to do is buy time for corals with these new populations we’re creating. The hope is that we’ll get real global action on climate change and greenhouse gas emissions.”

Coral doesn’t know it’s in danger, of course. All it knows is business as usual – feeding, growing, breeding. And while there are healthy coral reefs, that will include the incredible spectacle of mass spawning which is, as Peter says, “probably the greatest sexual reproduction event on the planet”.