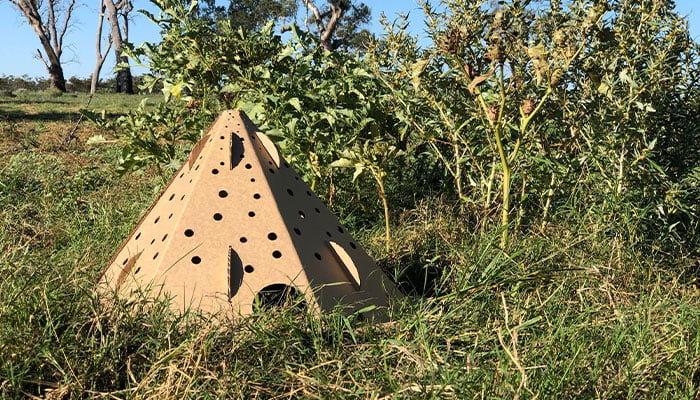 Flat-pack habitat pods developed by a Macquarie University scientist might be the salvation of small ground-dwelling animals trying to survive after bushfires.

Biodegradable wildlife shelters (flat-pack pods) developed by Macquarie University’s Dr Alexandra Carthey could be the difference between life and death for small creatures living in bushland ravaged by fire.

Safe house: A habitat pod in the field … the cardboard shelters are six-sided pyramids and come in an easy-to-assemble flat pack.

Her habitat pods have been designed as a safe house for ground-dwelling fauna such as bandicoots, possums, antechinus, bush rats and reptiles.

Arboreal creatures are well catered for with innovative nest boxes, bat boxes, bee and insect hotels, says Carthey, a research fellow in the Department of Biological Sciences. The ground-dwellers, she felt, were missing life-saving refuge.

The shelters are six-sided pyramids, 60cm on each side and 60cm high, made from cardboard. They come in an easy-to-assemble flat pack.

There is some thinking that more animals might die in the post-fire period from predators and exposure than during the fires.

The pod’s internal structure is three triangles that intersect at a central axis, creating a kind of honeycombed space big enough for the larger animals and providing nooks and crannies for smaller creatures and invertebrates such as beetles, native cockroaches and lizards.

The holes – roughly 150 per pod – are also there to let light in, to help vegetation regenerate and eventually take over the site, leaving the pods to biodegrade in situ.

The pods can be anchored with rocks, sandbags or wooden stakes, via a “skirt” of cardboard around the base.

Out of the fire into the frypan

Carthey has long had a fascination for the dynamics between wild predators and their prey. Seeing vulnerable, exposed wildlife being picked off by hordes of predators after the Black Summer bushfires in 2019/20 was a call to action.

Estimates of the numbers of animals killed has been based on how many would have been in the path of these mega fires, says Carthey. Three billion vertebrate animals were said to have been in the way of blazes that burnt more than 12 million hectares in eastern Australia.

“But there haven’t been enough studies to confirm the numbers,” she says. “There is some thinking that more animals might die in the post-fire period from predators and exposure than during the fires.

“Pods like these have a huge potential to make a difference.”

For the predator, it’s like suddenly spotting your prey across a mown grass lawn.

Most tiny creatures will die by predation rather than old age, she maintains. “A lot of their life, the behavioural decisions they make, and just how they go about their day, is about trying not to get eaten.

“They are hardwired to seek the safety of cover. And if you provide it, they will find it. After a bushfire, the thick grasses, leafy bushes, dropped bark, and leaf litter that small critters normally hide under have  been burnt away. For the predator, it’s like suddenly spotting your prey across a mown grass lawn.”

Cats and foxes are known to kill more prey than they can eat, she says. “For 10 bandicoots killed, for example, they might eat only one.

Somewhere to hide: The pods are meant for ground-dwelling animals such as the antechinus … Dr Carthey suspects such animals will use the pods as an escape hatch.

There’s evidence that cats, for example, will travel long distances towards the smell of smoke because they know there is going to be some good hunting.”

The need for cover is not a new idea, of course. “Chicken wire tunnels, sawn logs and piles of burnt logs have been used in the past. But most solutions involve dragging heavy things around, damaging fire grounds and preventing bush regeneration.”

The guests checking in to the habitat pods, however, won’t be bunkering down and reading the spa menu.

“It’s not anticipated that the animals will seek cover and hide until the coast is clear,” says Carthey. “We suspect the animals will use the pods more as an escape hatch, that they will run in and out the other side and into another pod, using the network of cover to thwart the predator.

“The pods will be obstacles that block the predator’s line of vision and slows them down – giving the prey a better chance of getting away.”

The flat-pack project has evolved in collaboration with the Australian Wildlife Conservancy and NSW National Parks and Wildlife Service. Carthey also conferred with the team behind the Living Seawalls project (finalists in this year’s international EarthShot Prize), which is led by Macquarie University’s Associate Professors Mel Bishop and Katherine Dafforn, and their designer, Alex Goad, of Reef Design Lab, a Melbourne design company that creates coastal habitat infrastructure and artificial reefs.

Testing ground: North Head near Manly after a backburn got out of control in 2021. Photo credit: Alexandra Carthey

“We experimented with the 3D-printing of moulds for prototypes made from recycled paper pulp,” says Carthey, “but in the end Alex’s idea of the folding cardboard design held up better in testing. The pyramidal shape also allows for better water run-off.”

The key merit of the habitat pods, says Carthey, is their biodegradability, the idea that they are only there for as long as needed.

North Head Sanctuary in Manly where, in October last year, a hazard reduction burn destroyed 62 hectares of bushland, is the location for the first field trial.

The headland is also the site of a mammal reintroduction program run by the Australian Wildlife Conservancy, working in partnership with Harbour Trust. Three small mammal species, which were locally extinct and have been restored since 2017, are likely contenders to benefit from the shelters.

Some 200 habitat pods will be deployed there. A further 100 will be used in a field trial in the Marramarra National Park, led by a student of Carthey’s, comparing the effectiveness of the pods in recently burnt areas with nearby unburnt areas.

Remote sensing wildlife cameras, triggered by motion and heat, will capture the comings and goings. Surveys of both the pods and vegetation regrowth will be assessed once a month during what is expected to be a 12-month project.

Dr Alexandra Carthey is a Research Fellow in the Department of Biological Sciences.

This story was first published by The Lighthouse by Macquarie University, Sydney. Read more on our amazing wildlife saving efforts here.