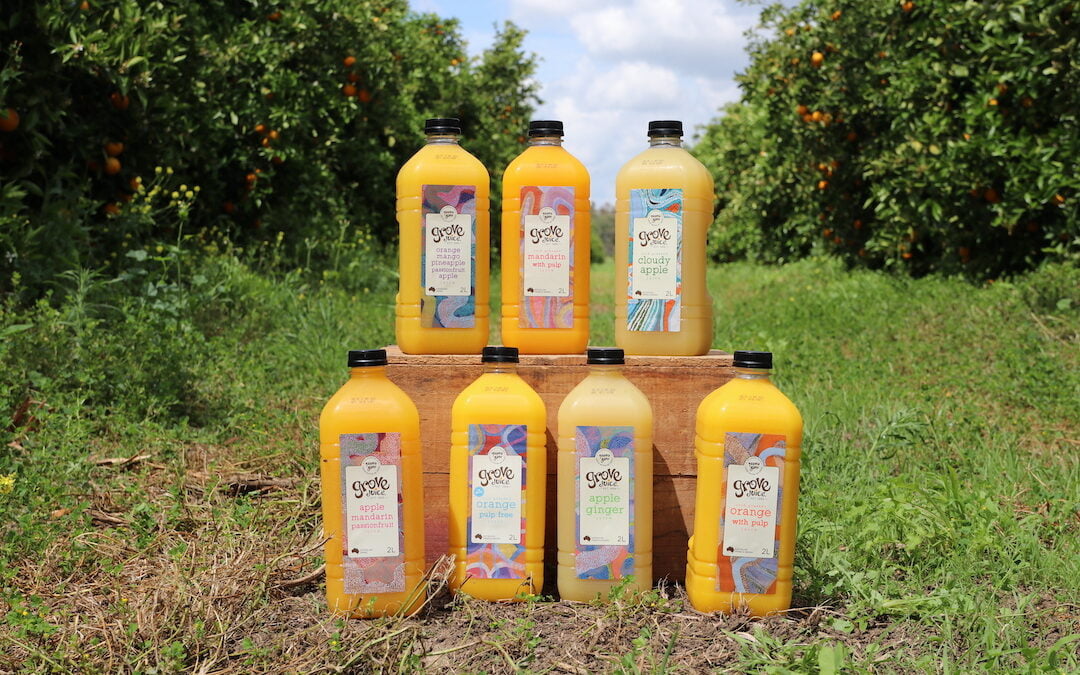 Grove Juice is 100% Australian owned, backed by a generation of farmers who have been crafting naturally healthy and delicious fruit juice since the 1960s. They are one of the few remaining Australian family-owned fresh juice farmers and processors, with a team of over 150 people working across multiple farms and factories located in NSW and QLD.

Grove Juice owner Dick Estens said the collaboration has been a “passion project,” driven by a desire to give back while also celebrating the incredible artistic talents of First Nations people. 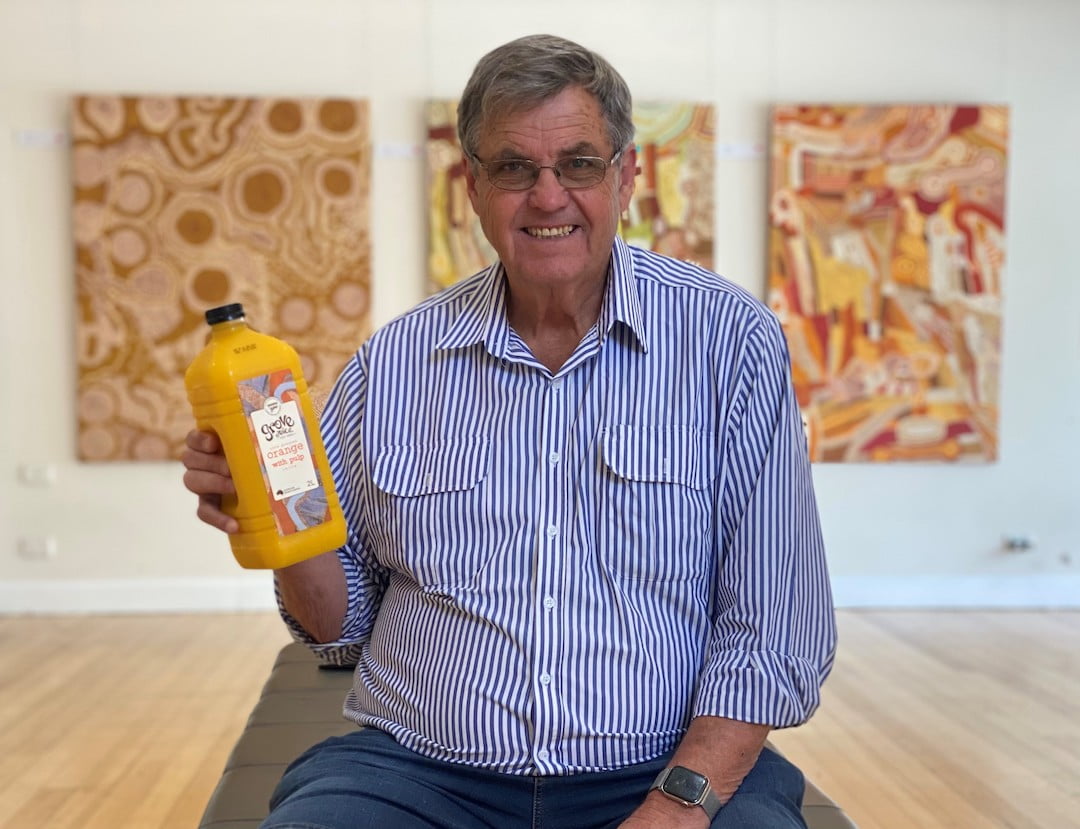 Not only that, in 2011, the family opened a not-for-profit art gallery and cafe called Yaama Ganu in Moree, NSW. Owned and operated by the AES, Yaama Ganu proudly supports and features consigned works from artists of the local Kamilaroi nation and Aboriginal-managed art centres from communities around Australia.

Dick’s work at AES saw him awarded the Human Rights Medal by the Human Rights and Equal Opportunity Commission in 2004, while in 2009, he was made an Officer of the Order of Australia. Some of the funds raised from sales of the Aboriginal Art Series will also go towards the essential service of the AES.

“These beautiful works of art will not only seek to raise money for Indigenous communities, but help to build self-esteem via expanded employment opportunities, and also enable Grove customers to learn about the work AES does whilst they eat their breakfast,” says Dick.

The values that Grove Juice operates by – genuine, respectful, open, visionary and exact – clearly infuse everything the Estens do. 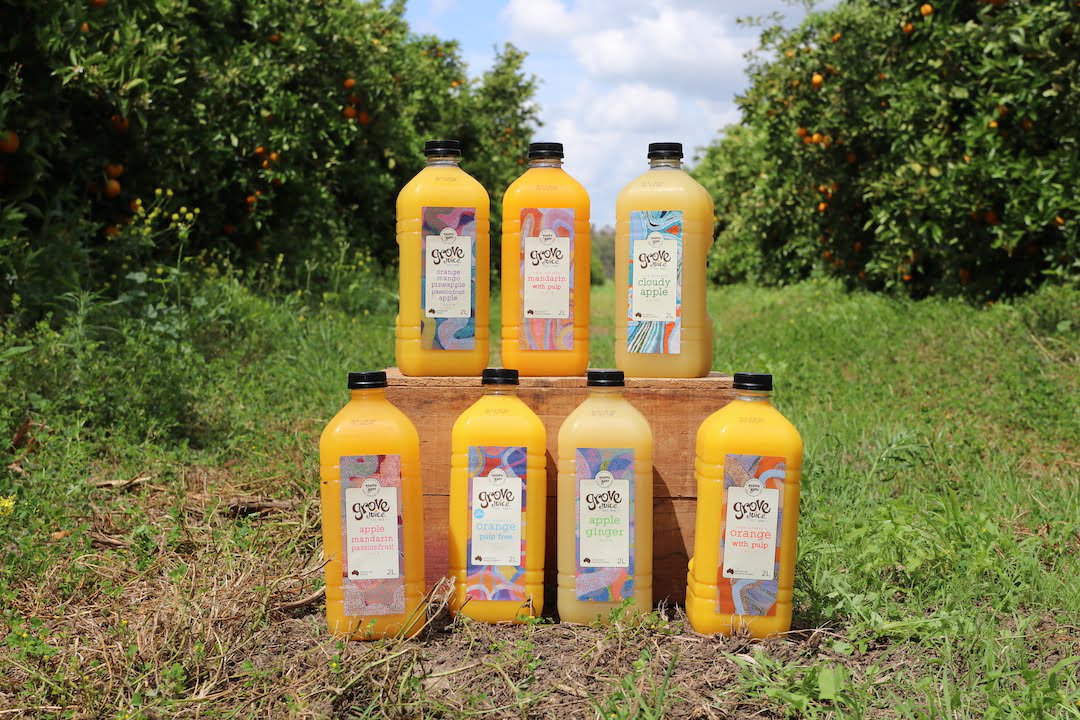 The artists featured are from Yuendumu, a large Aboriginal community; the population comprises families from similar language groups with strong cohesive traditional culture. Each of the artist’s striking artworks shares powerful stories of Country.

At just 22 years old, Vanetta Nampijinpa Hudson’s paintings feature on four of the labels: Orange with Pulp, Orange Mango Pineapple Passionfruit and Apple, the Apple, Mandarin, Passionfruit and the Apple Ginger. She began painting with Warlukurlangu Artists Aboriginal Corporation in 2017. She paints the Walukurlangu Jukurrpa (Fire Dreaming) stories which were passed down to her by her father, and relate directly to her land and the plants and animals that inhabit it. She uses bold patterns and colours to develop a modern interpretation of her traditional culture.

Liddy Napanangka Walker (now deceased) was a pivotal figure at the Warlukurlangu Art Centre, joining shortly after its inception in 1985. She was born in 1925 at Mt Doreen, and spent her younger years living with her family in bush camps. Her artwork features on the Cloudy Apply label, and depicts the Purlapurla Jukurrpa (Black Kite Dreaming), which tells the story of an ancestral hero. 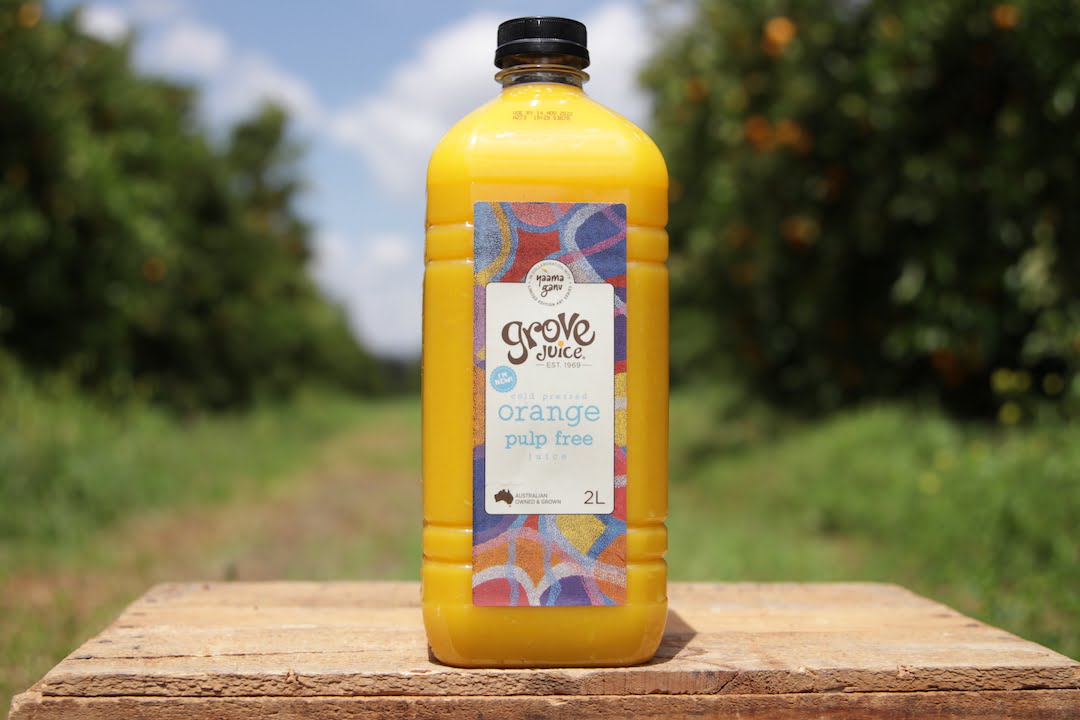 Managing Director at Grove Juice, Greg Quinn expects the collaboration to be a successful fundraising platform for the Warlukurlangu Art Centre and the AES.

“Our limited edition two litre juices will be available in over 840 supermarkets across Coles, Woolworths and Aldi nationally, and we hope to raise at least $50,000.

“With our established relationships with Indigenous communities, we may look to build on this initiative over time and feature other amazing artists from across Australia, for future brand collaborations,” Greg adds.

The colourful new range is available now in Coles, Woolworths, Aldi and wherever good juice is sold, for a limited time only.

For more great business stories, check out our interview with Tom Lawrence, founder of Swanky Socks.