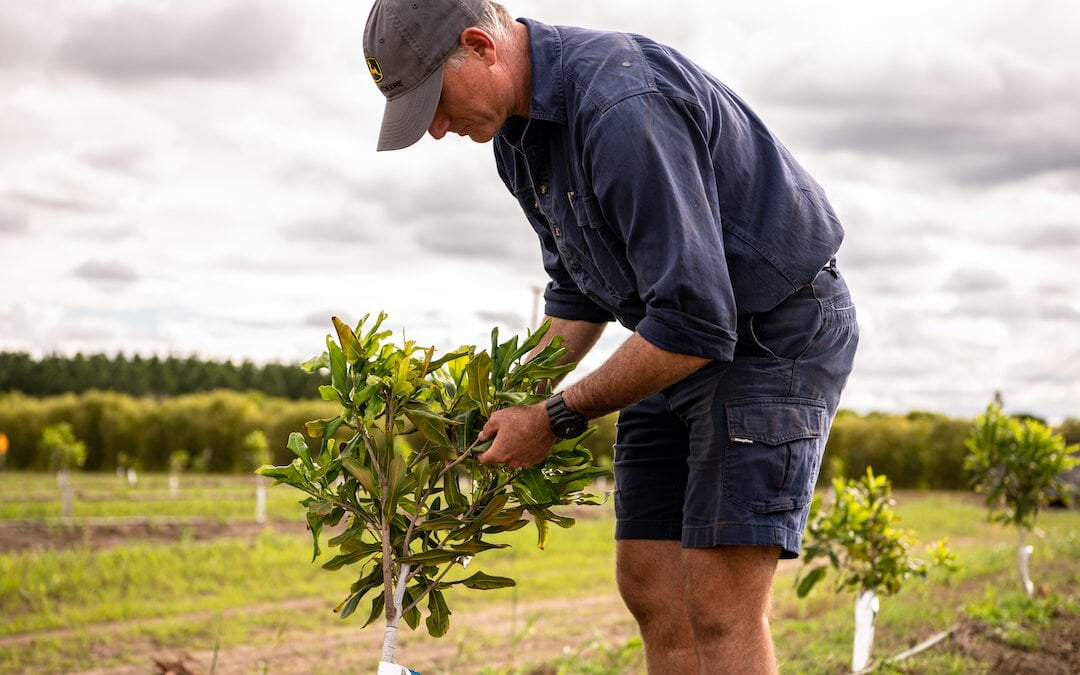 Australia has enjoyed a long love affair with the humble macadamia nut; known for its beautiful “buttery” taste and health benefits that range from its ability to lower your cholesterol, to keeping your hair nice and shiny.

The Australian macadamia industry is incredibly lucrative, generating around $300 million in export earnings. But it wasn’t until the 1960s that Australia took on the macadamia as a serious commercial crop.

The history of the macadamia

The macadamia is a member of the Proteaceae family, originating in the subtropical rainforests along the east coast of Australia more than 60 million years ago. (Macadamias don’t require irrigation if it’s grown in its natural environment.)

Indigenous Australians referred to the nut as “kindal-kindal” and “boombera” and have always known it has multiple uses beyond food, using its oil as a base for liniment and face and body paint.

Macadamias were first farmed in Hawaii, based on seeds imported from Australia in the 1880s. The Hawaiian macadamia industry took off in the 1920s. They were known as the “Hawaiian nut” until the 1960s when Australia took the macadamia seriously as a commercial crop. Today, Australia is the number one supplier of macadamias to the world.

Australia’s macadamia industry is experiencing its fastest growth in its history, with a decade of year-on-year price increases. When Australian Macadamia Society (AMS) CEO Jolyon Burnett began his role in Lismore 12 years ago, the price was $1.30 per kilo.

“But now it’s a bit over $6.20 a kilo, which is pretty much unheard of.  It’s fantastic and, at an industry level, it’s despite many southern hemisphere countries now all growing macadamias too. These countries include Kenya, South Africa, Vietnam, Brazil, Ecuador, Guatemala and now China. It’s still a relatively new product and demand outstrips supply,” says Burnett.

The growing and processing sectors of the industry quickly adapted to restrictions caused by the Covid-19 pandemic and remain largely unaffected.  “It’s been business as usual for the most part. Although there has been some minor disruption to our international shipping, as is the case with most export industries,” says Burnett.

An exciting time for the industry

There are around 800 macadamia farmers in Australia looking after 8.7 million macadamia trees, across 28,000 hectares. Bundaberg, Queensland, is Australia’s biggest producer of macadamias, followed by the Northern Rivers, NSW. Collectively, Bundaberg and the Northern Rivers region produce more than 80 per cent of the entire Australian crop.

Burnett says it continues to be an exciting time for the industry, with sustained investment in new plantings, expansion of growing regions and new varieties.

According to Burnett, harvesting conditions have been largely favourable over the last few months. And, best of all, he says the nut quality is very good; despite the challenging growing conditions experienced during the season.

“Notwithstanding the hottest and driest year in our recorded history last year, all regions are reporting a good quality crop,” says Burnett.

All growing regions are at different stages of harvest. Bundaberg, Australia’s largest macadamia producer, is out in front, having now delivered 80 per cent of its crop.

What’s so great about macadamias?

There’s no doubt Australians are macadamia mad. Australia has the highest per capita consumption of macadamias in the world, followed by the United States.

Macadamias have several health benefits; they’re the number one nut source of the ‘good’ monounsaturated fats vital for heart health. They also help to lower cholesterol and reduce the risk of heart disease; they’re low in carbs and sugar and have a moderate fibre content.

Macadamias are a source of protein, calcium, potassium, dietary fibre and a number of antioxidants – all of which are essential for our health and maintaining glowing skin, strong nails and shiny hair. Just one handful (30 grams) of macadamias contains nearly 10 per cent of your daily intake of iron, essential for good energy levels.

There’s also a huge demand for macadamias for use within confectionery and snacks globally. In fact, the demand has increased by 20 per cent in the last two years.

“Nearly 100 per cent of the macadamias you’ll find in supermarkets and whole food stores in Australia are grown, processed and packaged here in Australia. So, it’s easy to support Aussie macadamia farmers every time you grab a pack of delicious macadamias,” says Burnett.

Best of all, the industry continues to find new uses for the versatile nut. Not only is it available in shampoo, cooking oils and face creams, there have been recent trials with macadamia oil to heal the skin of burn victims.

“I understand the trials are in the early stages but it just goes to show how versatile the macadamia nut is. It is so much more than just a tasty snack,” says Burnett.

Burnett says many Australians don’t realise that all the macadamias available to purchase here are Australian. “I think it’s most important that Australians know the macadamia is an Australian native. It’s the most successful indigenous plant to be traded around the world and something we can be very proud of,” says Burnett.

“It’s such an iconic Australian product. About five years ago, Queensland celebrated 150 years of statehood and they ran a competition for Queenslanders to vote for the most iconic Australian things. The Great Barrier Reef came first, followed by rugby legend Wally Lewis, and then macadamias came third – ahead of the thong!”

Whip up this spicy macadamia butter to serve as the hero of a delicious savoury platter. When served alongside roasted pumpkin, roasted carrots, olives, feta cheese, tomatoes and fresh figs, this satisfying butter turns a platter into a delicious vegetarian feast!

Place the macadamias and lemon juice into a food processor and process to achieve a smooth nut butter consistency. If necessary, add a little water, a tablespoon at a time to create the desired consistency. Place the mixture in a serving bowl and stir in the harissa paste.