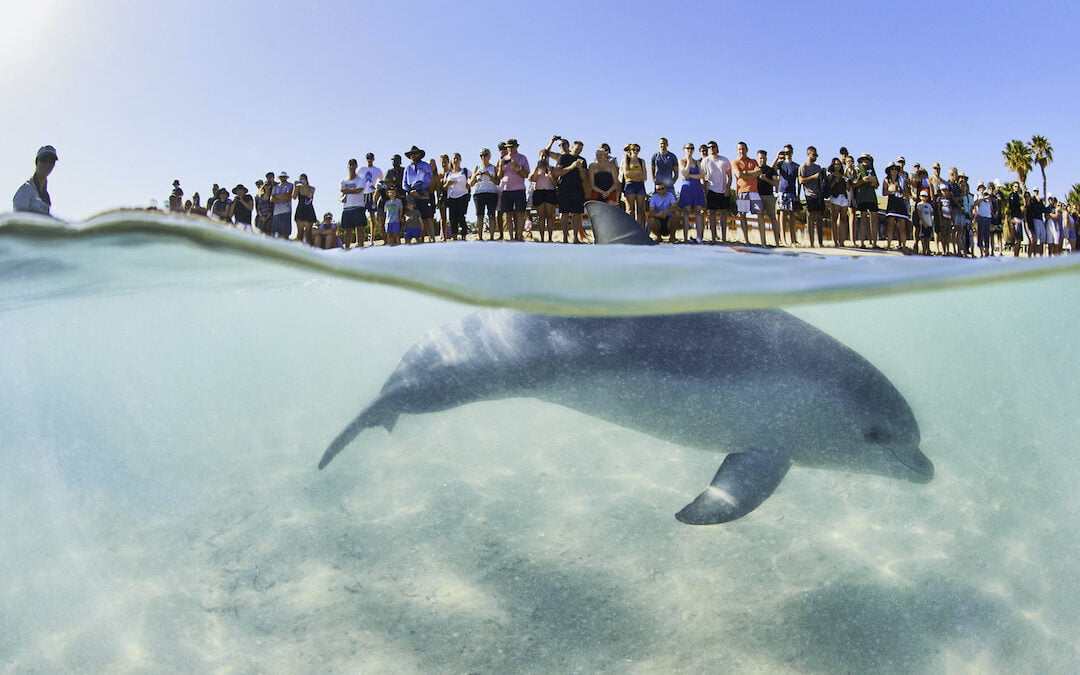 Professor of Biology and Psychology Dr Janet Mann has been researching Shark Bay and Monkey Mia dolphins in Western Australia for 33 years.

The Shark Bay Dolphin Research Project is the longest-running study of wild cetaceans in the Southern Hemisphere, and the second-longest study of dolphins worldwide. Here Janet shares her insights into what the world has learned from the hand-fed (provisioned) wild dolphins of Shark Bay.

Tell us about the Shark Bay Dolphin Project and your role with the organisation.

I am currently Director of the Shark Bay Dolphin Research Project and have served in that capacity for many years. I started researching the Shark Bay dolphins when I was at The University of Michigan in 1988. I started my position at Georgetown University as an Assistant Professor in 1991. Our research has been primarily supported by The National Science Foundation in the US, and also The National Geographic Society and The Australian Research Council (with collaborators at University of New South Wales and The University of Queensland). I lead the behavioural, ecological and demographic aspects of the research. My close collaborator, Dr Céline Frère, at The University of Queensland, leads the genetic studies of the dolphins. Shark Bay is an outstanding place to conduct wild dolphin research because the waters are clear and sometimes calm. There have been few direct human impacts on the dolphins in Shark Bay, as it is a remote UNESCO World Heritage Site.

There have been reports of several dolphin deaths at Monkey Mia over the past few years – some due to old age or shark attacks. Is this true, and are there any efforts to attract new dolphins to the program – which brings an estimated 100,000 visitors to the area every year?

Four of the six provisioned adult females have died since 2015: Nicky, Puck, Surprise and Shock. Three were elderly when they died. Nicky was 39, Puck was 40 and Surprise was about 40. Shock, Surprise’s daughter, was only 24. Shark attacks are not uncommon as nearly 75 per cent of the dolphins in Shark Bay have shark bite scars, some from multiple attacks. The Department of Biodiversity, Conservation and Attractions (DBCA) has been trying to recruit more dolphins to the provisioning program, but these young dolphins may have other priorities right now and do not seem that interested in accepting dead fish. Historically, adult females with nursing calves are the ones who are hungry enough to take dead fish from humans. Even Nicky, Puck and Surprise did not regularly take fish until they had their own calves. Possibly this is because freshly caught fish simply taste better.

Dolphins that are introduced to provisioning too early can become dependent on the handouts. There were two cases where young male dolphins (under age 10) started accepting fish and both died prematurely. Males are no longer fed – largely because they are more aggressive than females, both with people and with other dolphins. Adult females from two families have been successfully recruited in the past. The exciting element is that these are wild dolphins and people can stand on the beautiful beach or the jetty and watch dolphins engage in natural behaviours. When they are hunting, it is better to stay out of the water, so we are not in the way.

Onslow Airport in WA reported the highest temperature on record in the Southern Hemisphere at 50.7 degrees Celsius on January 13. What sort of impact does global warming have on dolphin environments?

Although Shark Bay is relatively pristine, it cannot escape climate change and extreme climate events. In 2011, Shark Bay and much of Western Australia experienced an extreme marine heatwave sustained over weeks. This caused devastation of the seagrasses (about 80 per cent die-off in some areas) and had consequences for the Shark Bay dolphins. The Monkey Mia dolphins are all seagrass ‘specialists’; they use seagrass habitat substantially more than other dolphins. Calf mortality spiked, but the effect was delayed, possibly because it was initially easier for the dolphins to hunt in sparser seagrass; the fish had nowhere to hide. There are some signs of recovery now a decade later, but we’re still monitoring the impacts. We just hope there isn’t another heatwave like the last one.

Dolphins form strong family bonds and are extremely social creatures. This is how they learn vital hunting and survival skills. Could the hand-feeding have anything to do with the deaths? Should we continue to interact with wild animals for the purpose of tourism?

The hand-fed dolphins pass down a number of socially learned behaviours to their offspring, including hunting behaviour, home ranges and social networks. Although we have shown that the calves born to carefully managed hand-fed dolphins can have high survival to three to four years of age (and sometimes as late as eight to nine years of age), juvenile survival at about age 10 is not so high. One reason for this is that calves may benefit from their mum’s extra food source when nursing, but juveniles have to hunt for themselves and may not be as well-equipped as those born to mothers who are not hand-fed. In addition, juveniles from hand-fed families have smaller home ranges than other juveniles, likely because they still like to stay near the area where their families are – the Monkey Mia beach. This is one reason to try to minimise the impact of provisioning and make sure recruitment does not occur until the dolphin is fully capable of hunting and looking after her offspring. Whether the provisioning can or should continue is ultimately a question for the local Shark Bay community and government agencies. Monkey Mia is a fabulous place to visit – but I must recommend that we should put less emphasis on feeding and marvel more at their natural behaviours.

Dolphins are considered ‘near-threatened’ by the International Union for Conservation of Nature (IUCN). Is The Shark Bay Dolphin Project working on anything to help foster safer environments for the animals?

The COVID-19 pandemic has impacted our ability to do regular fieldwork, but we are very interested in how seagrass specialists, including the Monkey Mia dolphins, are changing (or not changing) their behaviours since the seagrass die-off. In a recently published paper, we did not see any shift in terms of changing their home range size or where they hunted years after the die-off, but we would like to see if the younger dolphins might adapt to the environmental changes. We have always worked closely with DBCA to help reduce human impacts.

Kerplunking is when a dolphin slaps its tail hard on the water in seagrass habitats and is a way that the dolphins disturb fish so they are easier to see and catch. It doesn’t occur very often in Shark Bay, but one can sometimes see this behaviour east of Monkey Mia. Mud-ring feeding doesn’t occur in Shark Bay, but we have over 20 other foraging tactics that we routinely see that are much more exciting. In fact, Shark Bay is known worldwide to have tool-using dolphins! A small – and mostly female – proportion of the population use small basket shaped sponges to ferret prey from the seafloor. They get the sponges in the deep channels, wear them over their beak/jaw and primarily target bottom-dwelling fish that are hard to see. The sponge disturbs these fish from their hiding places and then they are an easy catch. Shark Bay is also famous for the ‘beaching’ behaviour at Peron Point. Once again, female dolphins are the primary beachers; only one family does it. They go after mullet primarily and basically hydroplane (swim very fast at the surface) to chase the fish onto the beach where they can catch it and U-turn back into the water.

How does the genetic makeup of ‘Puck’s line’ influence survival rates when it comes to being provisioned, and consequently having a smaller hunting area?

What did the research from ‘blow-sampling’ show in regard to provisioned and non-provisioned dolphins?

We collected blow from the provisioned Monkey Mia dolphins only and compared it to dolphins in captivity. The blow or respiratory vapor contains dolphin DNA; we were the first to show that you could collect dolphin DNA from blow. We also were the first to look at the lung microbiome this way. The lung microbiome, just like your gut microbiome, has lots of bacteria – some good, some not so good. We found that the wild provisioned dolphins have much more diverse microbiomes than captive dolphins – which is what you would expect and hope for. But we also found that the provisioned dolphins had human bacteria in their lungs, just like captive dolphins do. This shows that by closely interacting with humans, they pick up our bacteria and potentially our diseases. So we have to be very careful – especially since we don’t know if they can get COVID or other dangerous respiratory diseases from us. We usually think about zoonotic diseases – what we get from other animals. But the reverse can happen too!