The Ancient Greek alphabet – Why is it still used in contemporary society? 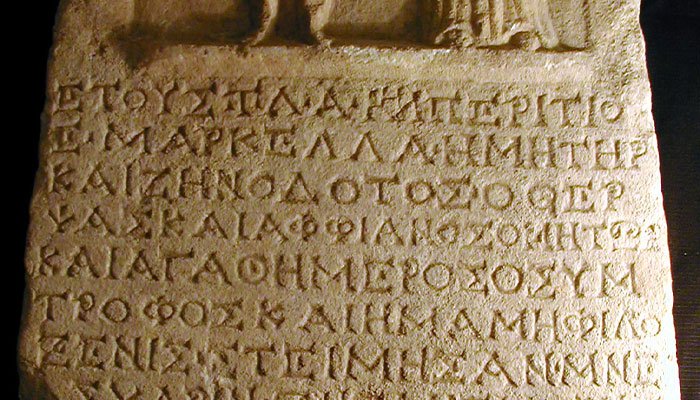 The Greek alphabet is having a big moment as the WHO continues to name COVID-19 variants after its letters – the latest being Omicron. Professor of Ancient History Ian Worthington explains its enduring relevance.

The modern Greek alphabet comes from the ancient Greek alphabet, so you can argue the letters – like the first, Alpha, and the last, Omega – are both ancient and modern.

Ancient Greek is the first alphabet that had separate symbols for vowels and consonants. It was derived from the Phoenician alphabet, Phoenicia being an area in the Levant around today’s Lebanon, whose phonetic alphabet did not have vowels, only consonants, and was spread by Phoenician traders throughout the Mediterranean.

The ancient Greek alphabet was the first to have actual letters for consonants as well as vowels, a technological advance obviously necessary for writing, which came about in the ninth or eighth centuries BC.

These symbols were used by the pioneers of knowledge, and have been retained throughout the ages to continue a tradition.

The Homeric poems of the Iliad and Odyssey were the earliest to be written down – originally they were memorised by bards who toured around the Greek world singing them as a sort of travelling show.

As the alphabet was being developed, and of course spoken, in the Ancient Greek world, the Ancient Greeks were at the same time making advances in mathematics, science, astronomy and engineering, and symbols were taken from the alphabet and incorporated – the most famous one being Pi, which is the ratio of the circumference of a circle to its diameter.

TV comedy The Big Bang Theory is an example of how Greek letters are all around us today, more than we realise.

The Ancient Greeks in this process of creation needed numerals as well – the first nine letters of the ancient Greek alphabet also corresponded with the numbers one to nine. Hence these symbols were used by the pioneers of knowledge, and have been retained throughout the ages to continue a tradition. That is why in over two millennia, nobody has come along and said, I am tired of calling it Pi, let’s call it something else.

Think of some of our other common uses of the alphabet: Alpha male, used to describe a dominant man, and Alpha Centauri, depicting the brightest star in the constellation Centaurus; a river delta, so-called because it has the shape of the alphabet’s fourth letter; and American fraternity and sorority houses with names such as Phi Beta Kappa.

In the TV show The Big Bang Theory, Sheldon or Leonard are often in front of a whiteboard covered in Greek letters. It is almost subliminal, the way we have the Greek alphabet coming at us all the time. In this way, Greek is part and parcel of our daily life, more than we actually realise.

And then along came COVID-19

When COVID occurred, the World Health Organisation decided to name the various strains of the virus by using ancient Greek letters to avoid naming any strains after countries where they might have originated and so prevent any stigmatism.

In addition, it was easier for the public to call a variant by a single Greek letter than the complex array of letters and numbers that scientists often assign to viruses or indeed scientific phenomena.

Omicron, which is 15th in the 24-letter alphabet, is the latest variant, and we’ve also had Alpha, Beta, Gamma and Delta.

Interestingly, there was a 1970s film called The Omega Man, from the novel I am Legend by Richard Matheson. in which Charleton Heston believed he was the last survivor of a global pandemic, thus the title as Omega is the last (24th) letter of the Greek alphabet.

The practice of using Greek letters today shows how ancient Greece is still alive and kicking in our modern world and how important it is to know about where things we take for granted today, for example democracy, the right of appeal, trial by jury, drama, all go back to the Greeks.

Greek civilisation is fundamental to history – Roman culture wouldn’t have been the same without it, which means that medieval and early modern European culture  may well have developed differently.

It is like ripples in a pond – Ancient Greece is the stone thrown into a pond, and all the ripples throughout time come out.

Ian Worthington is Professor in the Department of Ancient History at Macquarie University and specialises in Greek history and oratory.

The Macquarie University History Museum, located in the new purpose-built Arts Precinct, traces the journey of man over more than 5000 years on five continents. With more than 18,000 objects in its collection, it charts world history from early settlement in Australia around 65,000 BCE through ancient Egypt, Greece and Rome to the 20th and 21st Centuries.

* In the year 331, and the 5th of the month Peritios
Marcella, the mother
and Zenodotos, the foster
parent and Aphphianos the maternal uncle
and Agathemeros the foster
brother and the grandmother Philoxenis
honour with a memorial
Proklos, who lived 15 years