Western Australia has three species of black cockatoo: Carnaby’s cockatoo, the forest red-tailed black cockatoo and Baudin’s cockatoo. They’re all in need of help and thanks to new funding, ground-breaking health and ecological research could help save their lives.

Major threats to the survival of Western Australia’s black cockatoo species is at the forefront of research for Murdoch’s Harry Butler Institute. The research will be conducted over a five-year period where lead research Professor Kris Warren will explore survival threats such as habitat loss, disease, climate change as well as the continued pressures from pest species.

Kris explained that urban and industrial growth in the Perth-Peel region and the south-west of WA are of major concern. Currently, Carnaby’s and Baudin’s cockatoos are listed as endangered, and the forest red-tailed black cockatoo is listed as vulnerable.

Close-up of a young Baudin’s white-tailed black cockatoo perching on a thick branch.

“Perth is expanding, but with the right approach it could be a strong model for how development and conservation can be managed synergistically,” says Kris.

“In addition to supporting this important research project, Main Roads is investing in creating additional black cockatoo habitat through the Wheatbelt Revegetation Bank along or adjacent to road reserves in rural WA as part of the government’s Green Jobs program, installing artificial nesting hollows and protecting existing black cockatoo habitat.”

The research team will be using GPS and satellite technology to monitor flock movements as well as behaviour. They will secure the satellite tags to some birds under anaesthesia but not all, as tagged birds will mark the activity and movement of the whole flock.

Senior Research Fellow Dr Jill Shepard said, “This will help us to determine how habitat is used and to identify threatening processes, giving us a powerful way to guide the management of sustainable landscapes into the future.

“A large part of what makes Perth special is its unique and endemic biodiversity, which we are fortunate to have in our urban areas, including our iconic black cockatoos.” 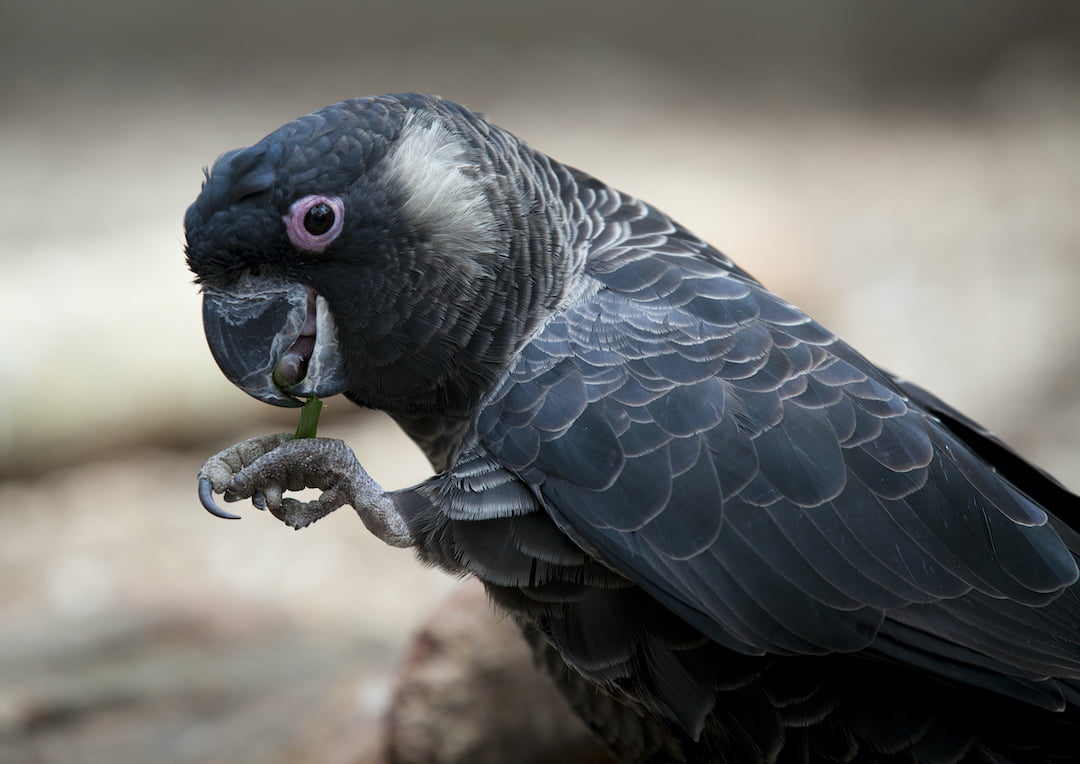 Male Carnaby’s White-tailed Black Cockatoo with red skin around his eyes indicating that he is in breeding condition. He holds a piece of grass that he is eating in his foot.

Implications of disease is also an avenue of the newly funded research, particularly in relation to the Carnaby’s cockatoo. Unfortunately, there are numerous diseases present that currently affect Carnaby’s nestlings such as Chlamydia sp., among others. Another major disease is Hindlimb Paralysis Syndrome, likely caused by agricultural chemicals. It is thought to be linked to two major mortality events in WA’s Wheatbelt breeding site which damaged 90 per cent of breeding birds in a horrific dual event. It is hoped the health research will develop a better understanding of disease management for the endangered species.

If you enjoyed this story on Western Australia’s vulnerable and endangered black cockatoo species, click here for more news on protecting Australia’s wildlife.