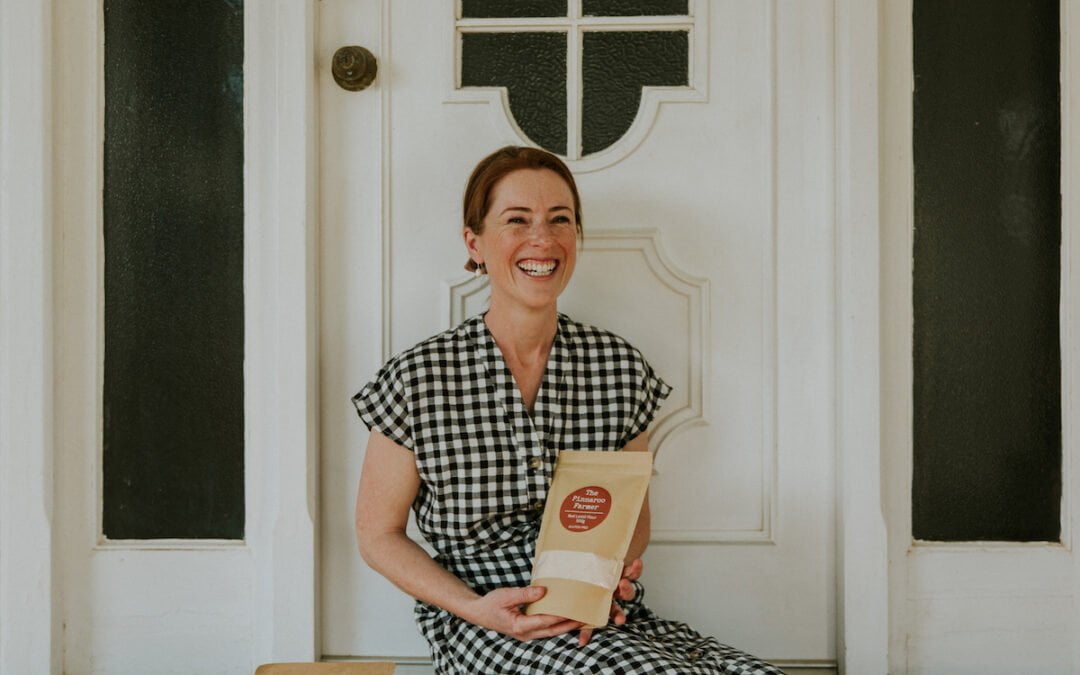 Phillipa Lawson, a fourth-generation farmer, shares the story of her family’s 1500-hectare property straddling the South Australian and Victoria border.

As a mother of two with an environmental science degree, working as a middle school teacher, Phillipa never expected to find herself at the helm of her family’s farm. Her husband, Skeet, an aircraft mechanic in the airforce, travelled extensively for work and had, too, never considered a life on the land. But when Phillipa’s father approached the pair about taking over the property, they were both surprised and delighted.

“Skeet had a massive tree change. I thought I was marrying an air force mechanic!” Phillipa laughs. “He was a real city boy. He was in the RAAF for 12 years. But after coming home, dad asked Skeet if he’d like to give it a go for a year – and here we are.”

The pair moved back to the farm and have been working the land ever since, their two daughters growing free-range in the paddocks Phillipa herself grew up in. In an effort to look after the land as much as possible, Skeet uses a multi-pronged approach to weed management, helping to reduce chemical use while boosting production and soil health. The family sow wheat, then barley, followed by a pulse crop for nitrogen fixation benefits in the soil.

That’s not to say they haven’t had their challenges. After a huge career change, the pair have had to learn everything from scratch. “In the first six years, we had two droughts a number of devastating frosts and a plague,” syas Phillipa.

But the benefits of spending more time at home with their kids far outweighs the difficulties of running the operation. In fact, it was the couple’s youngest daughter, Annabelle, that helped steer Phillipa towards her latest venture. The five year-old was a fussy eater with difficulty sleeping, and a nutritionist suggested more protein could be helpful. So Phillipa began incorporating red lentils straight from the paddock into their meals, but it wasn’t an easy introduction.

“If I added lentils straight into the dishes, she would pick them out,” Phillipa says. “I was talking to Skeet about it, and suddenly thought maybe I could grind the lentils to make a flour. Finally, I was able to get some protein into her diet! I found our lentil flour was the perfect way to thicken sauces and add nutrients to her biscuits and pancakes.”

Phillipa realised that the vast majority of lentils sold in the local supermarkets were imported, while the top quality Australian grown crops were exported overseas. With the crops vulnerable to foreign tariffs and considered unsalable if damaged in anyway, Phillipa saw the opportunity to diversify channels onshore.

“If the lentils are chipped or dented from coming through the header and aren’t deemed pretty enough for the packet, they don’t make export grade – even though they have exactly the same nutritional value,” Phillipa says. “It seems like such a waste, especially if producing a milled product. I started to look into milling lentil flour for more than just our family. Ultimately, my vision is that The Pinnaroo Farmer will one day use not just our lentils, but crops from around the district, giving farmers greater autonomy about how their lentils are sold.”

With demand for plant-based based proteins on the rise, Phillip feels optimistic about her product’s future. Devising a system to separate the lentil and grain side of their operation, the flour is completely gluten-free – another value add that the Lawson’s customers love. The lentils are harvested, then sent to be cleaned before returning to the farm to be processed by Phillipa’s small domestic mill. Samples of the flour are then sent to Adelaide to be tested for gluten traces, which helps put Phillipa’s mind at ease about the purity of the product.

In all, the red-lentil flour has taken six months to go from concept to delivery – now stocked in the Pinnaroo bakery, a supermarket in Adelaide and online. Launched during the COVID-19 pandemic, Phillipa’s panache and eye for a gap in the market, combined with her love for the land and the produce they create, has marked the venture a success with incredible future potential.

“It’s good for my family, it’s great for the product to be enjoyed locally and hopefully it will one day service other customers who’d like to be able to trace their lentils from gate to plate,” Phillipa says. “Most of all, it’s the support and feedback from our customers that love what we’re offering. This really makes me proud and suggests we’re on the right track.”

Lined 20cm square tin… I use whatever slice tin I have available!

Mix butter, sugar, eggs and vanilla in a bowl. It will form a smooth caramel batter.

Pour into the tin.

Cook on 170 degrees for 15-20min until slightly springy when you touch it.

Cool in the tin and then cut the slice into squares.

If I hide these from the hubby and kids… I can get nearly a week of lunchbox snacks! Sometimes I sprinkle coconut on top or use cranberries instead of choc chips.