The wonder of wood on Sydney Harbour 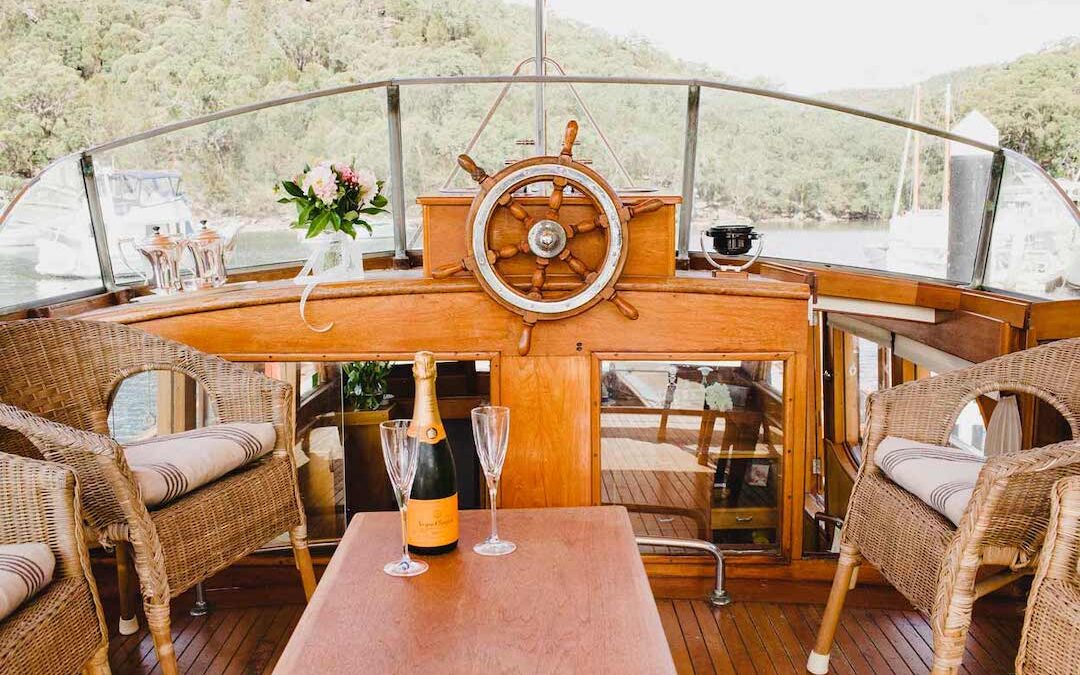 Long after their construction, classic timber Halvorsens still have the glamour factor to turn heads.

Glasses clink in salute as water laps the wooden hull. A breeze shimmies through the gum trees, and the setting sun ups the saturation on honeyed sandstone cliffs. It’s cocktail hour aboard MV Kalinda, anchored in Sydney’s Cowan Creek; time to relax, absorb the serenity and admire the varnish.

There’s something romantic about vintage timber craft — their classic lines, distinguished heritage and superb craftsmanship. They exude the refined grandeur of yesteryear, and none more so than Sydney Classic Boat Charters’ MV Kalinda, a 1950 Halvorsen Bridgedecker motor cruiser.

The Halvorsen name is synonymous with timber boats in Australia. Second generation Norwegian boat-builder Lars Halvorsen arrived in Sydney in 1924, and through determination and hard work established a family boat-building dynasty that now spans five generations.

As Mary-Louise Williams, then director of the Australian National Maritime Museum, says in the foreword to Wooden Boats, Iron Men: The Halvorsen Story, “The name Halvorsen is central to the achievements of 20th century boatbuilding in Australia.”

The quality, workmanship and timeless style of Halvorsens have made them highly sought after by wooden-boat enthusiasts, like skipper of MV Kalinda, John Spry.
“Old timber boats, like old timber houses, have their own individual ‘souls’ — the legacy of those who designed them, built them, sailed them, worked on them or lived on them,” he says. “It stems initially from the timber, itself a living thing.”

John started mucking about in wooden boats when he was 12, and MV Kalinda was his fifth wooden craft and third Halvorsen. “I love the style and functionality of Halvorsen designs,” he says. “They were the pinnacle of excellence of their time.”

In 2004 John was contemplating a lifestyle change, so he sold his electronics engineering business and, at 54, became a mature-age boatbuilding and shipwright apprentice, to the amusement of his mates.

At the time he and his wife Debbie owned a 26 foot Halvo, as they are affectionately known, but together with daughter Kitty, an accounts and marketing executive, decided to purchase a larger family boat. “We wanted a classic timber Halvorsen with the charm and elegance of 1950s luxury, but large enough with plenty of outdoor seating for comfortable day charters,” says John.

In 2007 they found their perfect match — online, in Seattle, USA. The 47 foot Bridgedecker was built in Sydney in 1950 and taken to America by Carl Halvorsen, chasing the Hollywood market. She sold immediately and changed hands many times over the years, by swapping, repossession and the winnings from a game of craps — the dice from that game rumoured to be in the bilge.

Following an arduous ordeal arranging transportation from Seattle, Hardway as she was then named, began to sink when unloaded from the ship in Newcastle. Despite knowing she would take on water due to plank shrinkage in transit, the volume was far greater than the on-board fire pump could handle, and only prompt assistance from the local water police averted disaster.

Told “you’ll never get an old boat like her into commercial charter,” her owners took on the challenge of restoration, removing live-aboard conveniences of furnace, laundry, trash compactor, dishwasher, cat flap and hot tub. The entire internal space was gutted, revealing the dice from the winning craps game.

The following years were a labour of love for the Sprys, returning the vessel to its original layout. Tragically, in 2010, Debbie lost her long fight with cancer, but the family continued the backbreaking work knowing she was with them in spirit.

In 2015 MV Kalinda, an Aboriginal name meaning ‘the sea’ or ‘a lookout’, was licensed for commercial operations, and now hosts guests for vintage high teas and cocktail parties on the sheltered waters of Cowan Creek, surrounded by Ku-ring-gai Chase National Park. Her retro glamour attracts proposals, intimate weddings, anniversary celebrations and photo shoots.

Shipwright skills aren’t a prerequisite for wooden-boat ownership, but time certainly is. “You need to be handy and retired or have bucketloads of money to pay for maintenance,” quips Halvorsen owner Cathy Astridge (who works full-time and maintains her boat herself). But John and Cathy agree paying someone to do general maintenance misses the point of owning a classic timber boat. “The more you put into it, the more you get out of it,” says John. “It’s an emotional investment.”

All that gleaming woodwork involves at least 10 coats of varnish, though, not something that can be knocked over in a weekend, especially by the inexperienced; which is why the Halvorsen Club was formed in 1991. Commodore Bob Allen says the club adds prestige, provides camaraderie and offers technical support.

Pride comes with preserving a piece of history, and Halvorsen owners see themselves as custodians of their heritage craft which, like vintage cars, are living museum pieces. They willingly share their vessels at wooden-boat festivals around the country, and in the case of MV Kalinda, out on the water, where you too can luxuriate in her vintage charm over a sunset drink.

Inspired to purchase your own boat? Click here to discover the best boats on the market.