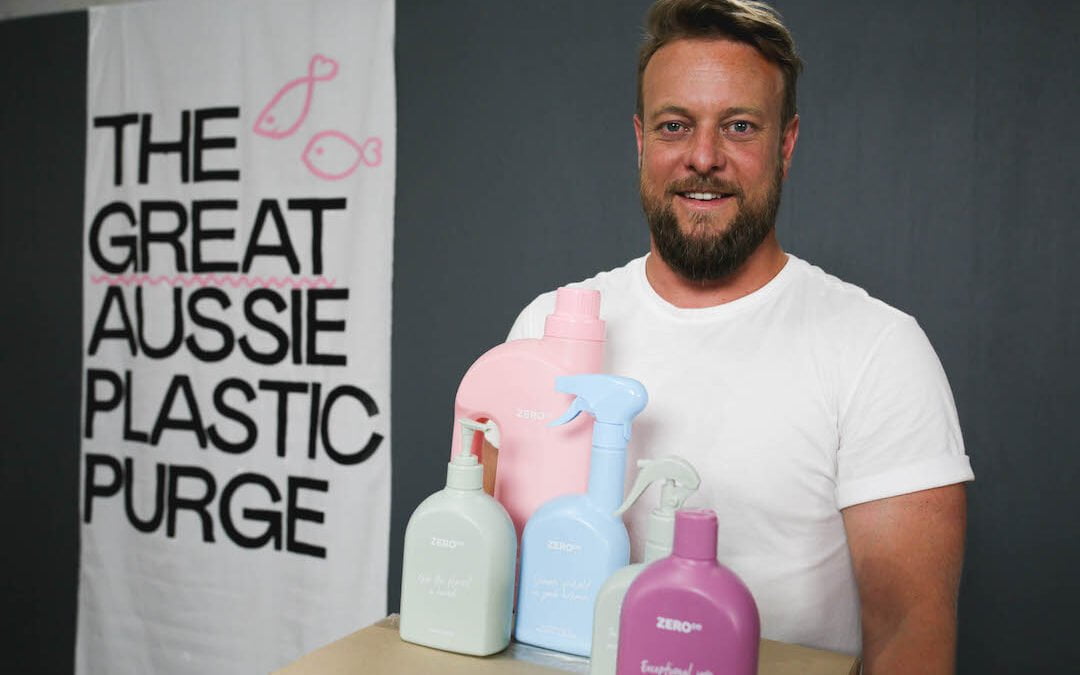 This Aussie startup plans to remove 20,000 kilos of plastic from our oceans by changing up the way we consume everyday household products.

Consider yourself a bit of a greeny? Australians on the whole think they’re doing a pretty good job when it comes to reducing waste. We fill up our recycling bins with empties, we might even visit a green grocer for our fresh produce, and we all adapted pretty well when the supermarket giants stopped handing out plastic bags.

But you might be shocked to know that only 12 per cent of Australia’s plastic is actually recycled. According to the most recent report from the Australian Government Department of Agriculture, Water and the Environment, we’re still consuming more than 3.5 million tonnes of plastic each year.

The reduce reuse recycle slogan was drilled into us in primary school but we seem to have forgotten the first two and skipped straight to the third. Many consumers live by the mentality that purchasing products made from recyclable material is a box ticked and a weight lifted off their conscience. But reducing our reliance on single-use anything, biodegradable or not, and re-using what we already have is far better than buying a new product and tossing it in the recycling bin every time. Recycling should be a last resort.

One Australian startup has honed in the second phase of the slogan – reuse. Zero Co is tackling the single-use plastic problem by delivering your everyday personal care and household products in a model that doesn’t just prevent new plastic from being created but turns the waste we already have into sustainable packaging to be used over and over again.

Founder and CEO, Mike Smith, says the idea evolved during a two-year trip with his wife in 2017.

“We wanted to get as far away from civilisation as possible and into the deepest parts of the wilderness we could get,” says Mike.

“We were blown away by the amount of plastic we saw, even in some of the most remote parts of the planet. When I saw the scale of the plastic problem, I started thinking really deeply about how we could solve it.”

In March 2019, Mike returned to Australia and began putting the idea together at the kitchen table of his inlaw’s farm in Wagga, NSW. A natural entrepreneur having launched two businesses previously, Mike set out to address the problem at both ends. “The two primary goals were to turn off the tap at the top of the plastic supply chain – to stop creating new plastic. And then deal with the plastic that has found its way into our natural environment.”

Mike admits that there’s nothing inherently sexy about laundry liquid. Yet, he was determined to shake up the industry through a mission-driven strategy rather than a product-focused one like all the other brands on the market.

“What we’re really trying to do here is create a people powered movement to solve this problem, so we’re trying to bring as many people on the journey with us,” shares Mike with excitement.

Consumers who join the Zero Co movement not only receive high-quality, great smelling hygiene and cleaning products straight to their door, they’re actually funding large-scale ocean clean ups all around the country.

The Zero Co model is cyclical in nature. In practice, your starter kit arrives with everything you need to deck out your cleaning cupboard, as well as a postage-paid return envelope (you’ll need this later). You’ll receive a collection of bottles made from the very plastic waste that the Zero Co team is pulling from the ocean. You’ll find a pouch for each bottle – also made from recycled materials – filled with lab-tested, sweet-smelling, cruelty free household products. Once you squeeze out the good stuff, you simply post the empty pouches back in the envelope provided, to be cleaned and reused again and again.

The machine that cleans the pouches is one aspect of the business Mike is particularly excited about. It will be a totally bespoke, first of its kind – one that Mike says will require a lot of testing and tweaking but will ultimately be a game-changer.

“We should be able to clean one million pouches using less water than one household uses in a single year,” Mike gleams.

Working with a team of industrial chemists, Mike set the bar incredibly high. He wanted to produce a selection of products that were just as effective as the big brands but without the nasty ingredients such as petrochemicals and palm oil. After months of reformulating and testing, Zero Co launched with ten stand-up products, though Mike has hinted at plans to expand the range early this year. The products range from hand and body wash to laundry liquid and stain remover, dishwashing tablets and multi-purpose cleaner to air fresheners and toilet cleaner. If you’re wondering how they stack up against the big brands, independent testing performed by D-Labs has even shown that Zero Co products work just as well (if not, better) than the stuff in the supermarkets.

The “zero waste” movement has seen global brands such as Lush, Ethique and Koh adapt to a more sustainable business model by creating products that create little to no waste. Shampoo bars, toothpaste tabs and deodorant rubs are among the examples being adopted, albeit with hesitation from consumers. The problem is, all of these alternatives require consumers to change the way they use a product. Asking consumers to chew up a tablet rather than squeeze out a bit of toothpaste like they’ve done everyday for their entire lives is going to take a bit of getting used to. Zero Co stands alone in offering a product that doesn’t require people to dramatically change their ways, while maintaining a zero waste approach.

Today, more than 18,000 Australians are currently using Zero Co products in their homes and offices. The team has expanded from one to nine in just 18 months. Long-term manufacturing and distribution deals have been signed, and huge challenges have been set. Aussie consumers are getting behind the movement, looking after themselves and their homes with Zero Co, but the journey to get here was anything but squeaky clean.

After facing a slew of no’s from potential investors, Mike bankrolled the project with his own life savings. In July 2019, Kate Stapleton was brought on to develop a marketing strategy, and a plan was hatched to launch a crowdfunding campaign to bolster the project. Zero Co soon became the most funded Australian Kickstarter project of the year, amassing more than $742,000 in pre-orders from almost 7,000 Australians.

Riding the wave of their crowdfunding success, the team conducted their first ocean cleanup in Indonesia, pulling 6,000 kilograms of waste from the Java Sea. Sharing the journey with their growing community of followers, support continued to snowball. That was until March 2020 rolled around.

Along with countless other businesses around the world, Zero Co’s lofty plans came to a screeching halt as COVID-19 sent the world into a spin. Issues with manufacturers, engineering setbacks and failed test results proved almost insurmountable challenges for the Zero Co team. However, August brought a welcome delivery of winning bottles and pouches and with it, a collective sense of “we got this!”

“It felt like everyday there was a potentially project-ending dilemma. Our timelines blew out overnight because of COVID,” Mike says shaking his head, still surprised that they made it through.

Though the pre-orders from the kickstarter campaign were promised for July 2020, it wasn’t until October that boxes of Zero Co began arriving on doorsteps. Mike says transparency was essential for maintaining their customers’ trust. “We were putting out regular project updates to our community. Everyone was supportive of the mission and understanding of the challenges we were facing.”

With a $2.5 million boost from private investors, the reality of running a game-changing, industry-disrupting company finally set in. Mike’s team expanded and they began scaling the business to meet the growing demand.

The focus for 2021 is twofold: continue attracting new, environmentally-conscious customers while maintaining the existing ones without letting them slip back into old habits. Mike says the latter is the biggest challenge they’re hoping to tackle in the first half of the year. The team is currently working on a personalised subscription model where customers will receive reminders based on their individual consumption patterns.

“For a subscription model to be effective, it needs to be customised,” says Mike. “The plan is to begin with an on-demand service to give people a chance to trial all of the products. Meanwhile, we’re capturing that data as re-orders come in which will help us understand how much product people are using at what times.”

Mike says that getting people excited about solving the single-use plastic problem is key to driving awareness and, ultimately, sales. In November last year, the company launched The Great Aussie Plastic Purge which saw Mike drive from Cairns to Canberra educating Aussies about our plastic problem. He carried with him no less than 3,109 single-use plastic bottles – the average number of SUP products Australians buy and throw away in a lifetime.

Mike managed to snorkel the Great Barrier Reef while towing his fishing net full of trash. He went for a surf on the Gold Coast with his trash in tow. When he made it to Sydney, Mike and his trash net joined Malcom Turnbull for a kayak around Sydney Harbour and when he finally made it to Canberra, Mike dragged his plastic behind him as he paddled along Lake Burley Griffin with Shadow Assistant Minister for the Environment, Josh Wilson.

Along the way, Mike met hundreds of people who were not only keen to buy a box of Zero Co products but who wanted to collaborate in order to spread the message.

“We met one guy on the road trip who we’re going to join for a scuba dive to clean up the bottom of Sydney Harbour. We’re even planning to go right up to Cape York to collaborate with another friend we met along the way to do a clean up at the very tip of Australia.”

In 2021, Mike’s Big Hairy Audacious Goal is to pull 20,000 kilograms of plastic waste out of Australia’s oceans, and with increasing support from plastic-purging Aussies, that will be just the beginning.

Find out more about Zero Co or order a box for your house at zeroco.com.au