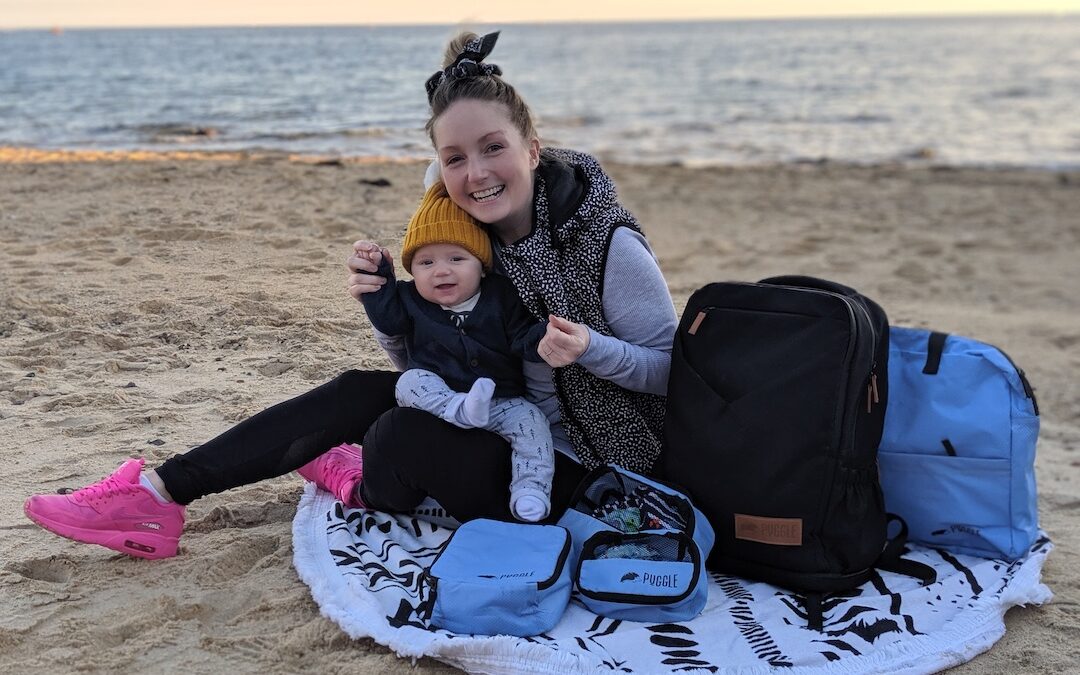 We celebrate three amazing women who managed to bring up families while launching businesses.

Tiffany has always loved the outdoors, often actively exploring regions near her base Melbourne with her husband Nathan. When their first daughter Tanner was born in August 2016, Tiffany didn’t see why she and Nathan couldn’t keep up their active lifestyle.

But it wasn’t so much the newborn juggle that Tiffany found a challenge… more the lack of quality baby products around for active families. “Tanner was only a few months old when we realised that the baby products that we had purchased were not working for us,” she says.

Tiffany resigned from her full-time job as a health and physical education teacher and started working on a concept she hoped would encourage parents who had been active pre-kids, to keep living as they had before… albeit with a bit more to carry. Puggle Baby Australia was launched in February 2017.

A Kickstarter campaign was next on the cards, and baby Chase was born while they were in the midst of the whole thing. “But the result was 100 per cent worth it,” she says.

When you look for baby or nappy bags online, hundreds of options pop up. Tiffany set about creating a product that would have sections for laptops, swimmers, passports and an RFID-protected pocket – to help travelling families stay safe on overseas adventures.

As awareness of the brand grew, Tiffany realised rebranding and expanding were the next steps. “We changed the name of the company to Jumply in January 2020. We wanted the name to resonate with the idea of parents getting out and about with their kids,” she explains. “Then in mid-January 2020 we launched into Japan.”

In a way, Tiffany and her family encapsulate the Jumply brand. Chase is now 16 months old and running around. Four-year-old Tanner is a proud older sister who loves moving just as much as Chase. And Tiffany and Nathan are showing no signs of slowing down, teaching their kids that an active lifestyle is the norm.

2016: Welcomed Tanner into the world

It’s a little bit ironic that Naomi Korolew decided to work in the wedding industry after choosing to leave her own marriage in January 2014. “I confess that I’m not the kind of girl who was totally into weddings,” she laughs.

As it turned out, her ex decided he didn’t want to continue living in Australia at the same time. And so, Naomi found herself a sole parent to a one-year-old. “This made continuing my corporate career working as a senior manager in the oil industry impossible – unless I wanted to outsource parenting – which I didn’t.”

Naomi started by assessing her likes and dislikes; taking a good hard look at the opportunities available in her local area. “This is what led me to becoming a marriage celebrant,” she says. “It ticked all my boxes and was an industry with a low barrier to entry.”

Next Naomi identified couples with kids as a demographic being underserved by the traditional wedding industry. And in July 2016 she launched a local pop-up wedding company with few different levers to create simple, beautiful and affordable occasions. “The average wedding spend in Australia is over $50k, but the pop-up concept can save couples 70 to 80 per cent of the average wedding budget, without sacrificing on quality,” she says.

Local interest grew quickly, then a global shift in attitude towards wedding budgets helped Naomi decide what to do next. “I rebranded, relaunched and expanded our offers in December 2019 to include even more weddings, plus pop-up elopements.”

These days Naomi is living the balanced lifestyle  she craved when the idea started coming into fruition. Now that her son, Hugo, is seven and at primary school, she works during school hours and at nights when he’s asleep. Many of her pop-up elopements are midweek, and when she has weddings he has playdates or goes to his grandparents.

Supported by her two virtual assistants, Naomi’s Collective has swelled to involve more than 20 contractors, but family always comes first. She and Hugo take a month off over winter every year to explore a different country together. But she can’t help herself; when she sees an opportunity to make life easier for couples, she takes it. So, destination Pop Up Weddings are coming soon.

The Pop Up Wedding Collective Story

2014: Got divorced, became a sole parent and resigned from the oil industry

2015: Identified the wedding industry as an opportunity and began studying to become a Commonwealth-registered marriage celebrant

2020: Re-launched as The Pop Up Wedding Collective, helping couples from across the globe start their married lives without a financial hangover

The story of Manly Spirits Co came to life in late 2015, when Vanessa was holidaying with her husband David in Tasmania. “While driving through the hills of Tasmania on a foodie weekend, we had a light bulb moment,” she says. “I had reached the chapter in my life where the ability to build a scalable business had arrived. I saw the craft beer explosion and the rise of craft spirits globally and decided that we needed more Aussie spirits to grace back bars and bottle shops.”

The business planning stage took the couple six months. Then it took another six months to secure buildings, design the brewhouse, stills, bottles, packaging and cocktail tasting bar. “Our distilling philosophy is that we take the best of tradition and then innovate with the use of native Australian and marine botanicals producing complex modern spirits,” Vanessa explains. “Authenticity and passion are instilled into all our products and brand.”

Although she doesn’t have one favourite product, Vanessa can name a few that customers keep coming back to. There’s Lilly Pilly Pink Gin with its fruity notes, and the internationally awarded Australian Dry Gin made with locally foraged sea lettuce. The bespoke bottles are decorated with the company’s signature Fibonacci pattern. “It represents perfection and balance in nature,” Vanessa explains.

The kids (who ranged from ages 13 to 18 when Vanessa and David launched the distillery) have all been involved, too. “They have all worked in the business, as cocktail bartenders, IT support staff, sales reps, event staff, bottlers and packers. And some have been fired and rehired from the business,” Vanessa laughs. “They get some pretty good perks, too… mainly being able to have parties at the distillery and cocktail bar.”

The older two of the four, Harrison and Bella, also like to come along to yoga. “I believe in work-life, balance so I launched the Gin Yoga concept in 2018 as a bit of fun at the distillery,” says Vanessa. “There’s nothing like adding the extra challenge of perfecting your ‘crow pose’ whilst sipping your gin with your wheat straw.”

2015: Found soul mate and remarried. Went on a foodie holiday to Tasmania

2016: Quit corporate jobs to focus on building the distillery

2017: Launched brand with gin and botanical vodkas. Opened distillery and tasting bar to the public

2019: Expanded distribution with duty-free and exports to the UK and Europe