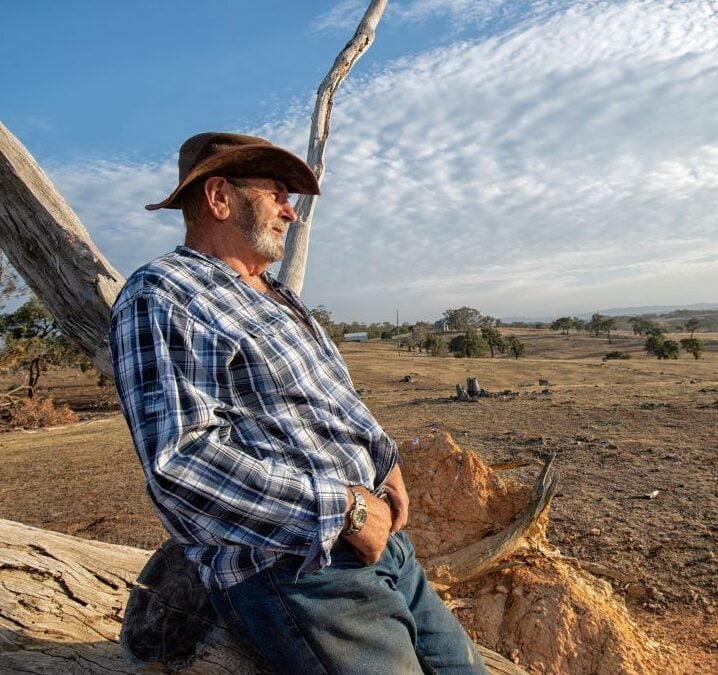 We may be the lucky country, but many Australians don’t feel that way. Every day, eight people in this country take their own lives.

Suicide is an even bigger problem in the country. A recent study by the Centre for Remote and Rural Mental Health found suicide rates in rural areas are more than 50 per cent higher than in capital cities, while the suicide rate for farming men in Australia is actually double that of the general male population.

The drought, the worst to have hit Australia in 50 years, is exacerbating the crisis. Research on Australian farmers published in the US journal Proceedings of the National Academy of Sciences shows a 15 per cent increase in the suicide among working-aged men during periods of drought.

But the bush is fighting back with a small but determined army of mental health professionals and volunteers who go above and beyond to help farmers in need. We spoke with three of them about the modern farmers’ plight and their experience working on the frontlines.

Jenny O’Connell – Leading from Within

There are few parts of Australia the drought has hit harder than the Murray-Darling Basin. Here, below-average rains since the year 2000 have seen 60 per cent of dairy farmers sell up or go broke.

“It’s very evident from doing the sums that farming is not viable anymore,” says Jenny O’Connell. Jenny is a clinical social worker in Shepparton, Victoria. “But for some, especially the intergenerational farmers, their work, their lifestyle and home are all tied up with farming. So quitting the farm means losing everything. And when everything they have is being threatened by drought, vegans, water politics or any other source, their mental health can be compromised.

“They feel like failures even though it’s not their fault – it’s the drought’s fault – and there’s a tendency to think there are no other options other than suicide; that their families will actually be better off without them as they might get a life-insurance payout,” O’Connell explains.

During the day, O’Connell works as a clinical social worker at a private practice in Shepparton. But at nights and on weekends she runs pro-bono trauma-recovery therapy sessions under Leading From Within; a non-profit group she and her husband founded in 2000 after conducting an evaluation of the first sector response to high-profile suicides in the area.

“After those suicides, there was massive trauma in the community but no one was interested in using private or public treatment,” she says. “But my husband and I thought there should be a process to help people recover. Leading From Within is based on the principle that instead of internalising trauma and becoming victims with bad mental health, that growth can come from traumatic events.”

Mary O’Brien – Are You Bogged Mate

When a spate of suicides hit Dalby Downs in central Queensland a few years ago, many people in the community turned to Mary Obrien for help.

“Friends and neighbours were ringing me to talk, which was great, but I was concerned about my lack of skills,” Obrien says. “But what I discovered is the professional from the city, they didn’t understand country people at all. They say men in the country need to sit down and express their feelings, that the men have to change. But it’s them that need to change their approach, and how they communicate with men.”

Are You Bogged Mate is the manifestation of Obrien’s research; a one-woman workshop that engages directly with rural men to break down the stigma surrounding mental health problems.

“It started as something I tagged onto my work,” Obrien says. “I travel around the state teaching spray-application technology. Afterwards, I ask the blokes if any of them are feeling bogged, and because they already know me, they listen. My approach is fairly direct. I keep it simple, peel away all the fluffy stuff and talk to them in a language they can understand.”

Obrien reckons farmers are pretty much draught-proof. But it’s not just the drought that’s draining them today.

“Most farmers can cope with drought. In some parts it’s been going on for seven or eight years now,” she says. “But now there are new social issues that weren’t around 10 years ago like the fish kill in the Darling River. There was huge public scrutiny. Farmers were blamed for taking too much water from the river. Their kids got bullied at school, and now they’ve got this vegan activism to deal with. It’s put all this extra pressure on farmers that they don’t need.”

“I always thought when the ground gets sick, so do our people. It’s very similar in the Aboriginal culture,” says Dianne Gill, a registered nurse from Condobolin in central NSW. “So during the Millennium Drought, I started trying to figure out how we can help our farmers stay well and ended up joining the Drought Mental Health Assistance Package.”

When the Millennium Drought ended in 2009, Gill’s work was folded into the Rural Adversity Mental Health Program.

“To tell you the truth, the drought never really went away,” she says. “It takes cattle farmers seven years to recover from drought, while orchardists need 15 years to replant and regrow their trees, so even though there were a few good years of rain, for most farmers, the stress never left. Then they’ve got the isolation of modern farming to deal with. Going back a generation or two, you’d have five men working at a property. Today with machinery and the high cost of labour, they work long hours all by themselves. And while they’re very good at looking after their farms, they’re not very good at looking after themselves.”

Gill connects with stressed-out farmers at field days, agricultural shows and via referrals from old patients and friends. “I’m not a Florence Nightingale-type character,” she says. “I wear jeans and boots, I stand shoulder-to-shoulder with farmers and ask them if they’re OK.

“I also ask them to think of any mates or neighbours who normally come to these things and aren’t here, and suggest they visit them. And I teach people about the four signs that can indicate someone could be in trouble: a change in their physical appearance, substance abuse, comments about ‘ending it’ and a tendency to not talk and then when they do talk it’s all negative.”

Find out more at ramhp.com.au