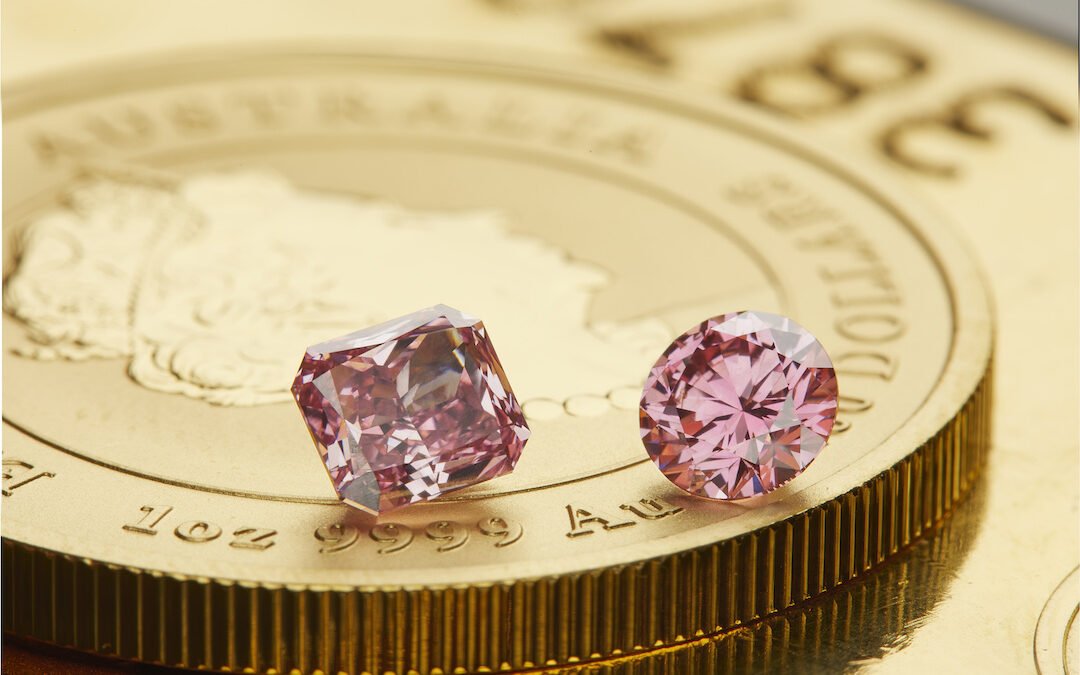 Approximately 95 per cent of the world’s pink diamonds were produced at the Argyle Mine in Western Australia. Since it’s closure in 2020, the price for pink diamonds is rapidly increasing.

Anna Cisecki from the Australian Pink Diamond Portfolio says the Australian mine produced the highest quality pink diamonds in the world. Investors are rapidly recognising this. Pink diamonds have displayed value increases every year without fail. Since the Argyle Mine closure, there’s less supply and greater demand.

What causes the colour variation in pink diamonds (PD)?

Pink diamonds have a certain mythical allure in some ways. Unlike with other coloured diamonds, to date, we still don’t know specifically what causes their colour. Natural diamonds are formed deep within the earth when carbon is exposed to enormous heat and pressure. In the case of other coloured diamonds, if traces of another element are present, you get a coloured diamond – for example, traces of boron will result in a blue diamond, and traces of nitrogen will result in a yellow diamond. With pinks, however, there are no other trace elements; rather, it’s a twist in the lattice structure caused by an unknown fluke of nature.

What are some of your concerns regarding the Argyle mine closure in 2020?

The closure of the iconic Argyle Diamond Mine is in essence the end of an era in the diamond world. It’s a geological masterpiece, a one-off that won’t be repeated ever again. Most of us in the industry feel pretty special to have been involved in its story as it were.

That said, even though the mine has closed, its story will not just live on, but thrive in the years to come, just like the names of history’s most famous artists, and demand for their works, lives on long after they themselves are gone.

Has the closure of the mine benefitted you in any way?

Given that the Argyle mine represented 95% of the global supply of new pink diamonds each year, its closure has profound implications for investors. They were rare to begin with, but that scarcity has gone to a whole new level now, with the production of pink diamonds essentially coming to a complete halt going forward.  So with no new supply coming and growing demand, prices are being driven up significantly and we foresee a pretty strong bull run on pink diamonds for the decade to come, which will of course mean that we expect trade to continue booming.

It’s been some time since their closure, can you explain how this has had an impact on the (PD) trade?

In terms of the closure of the mine last year, we’re definitely seeing a sense of ‘fear of missing out’, as it were. Demand was already strong leading up to the closure, but since the announcement that the mine had ceased operating, we’ve seen an almost 50% increase in demand, and this is being seen across the industry. With no new pink diamonds coming onto the market in the near future, people are becoming very motivated to buy now before the chance to own one of these unique assets is gone forever.

With growing demand and finite supply, the price of pink diamonds has risen very strongly and has outperformed almost all other asset classes including shares, property, and managed funds.  We’ve seen an average 30% growth overall across all categories of investment pinks, with the top categories of pink diamonds seeing more than 40% price growth since the Argyle mine ceased production.

Can you at all predict when other mines may run out of supply as well?

While occasional pink diamonds can be found in other mines, (in Brazil, Russia and India for example), there is no other steady supply of pinks in the entire world.  The Argyle mine was unmatched in the sheer quantity and quality of the pink diamonds it produced over the years.

So even though other diamond mines may be maintaining or even increasing production, they aren’t producing pink diamonds, especially of the quality Argyle is known for, in any great volume at all.

As such, the implications for investment are significant– market fundamentals dictate that when the supply of a product in high demand is cut – prices are very likely to increase.

As an industry professional, what’s your opinion on investing in PD’s?

In terms of the future outlook, pink diamonds are incredibly well-positioned to thrive, and not just because of the closure of the Argyle mine. Pink diamonds have several characteristics that investors find greatly appealing, particularly considering the volatile economic situation we find ourselves in now.

Some of these reasons are specific to the diamonds themselves as mentioned, including their rarity and physical beauty, which make them very attractive.

They are also very stable, in that they don’t demonstrate the volatility we’ve seen in equity markets, commodities or even with gold and other precious metals. So when financial markets wobble, as they invariably do, pink diamonds can typically be relied upon to maintain their value.

They are also truly limited in supply which gives them inflation-protecting qualities and the proven history of strong long term returns make them attractive as investments in their own right too. It’s worth remembering that even when Argyle was in production, pink diamonds were growing by more than 10% per year.

And now, with 95% of the world’s annual mine production gone, and with demand continuing to rise, it is almost certain that prices will continue to rise as well, and that the next decade is likely to be incredibly rewarding for investors who put some of their money in this unique asset class.

On your website it states, ‘average 11.2% growth per year*’, and you recently commented ‘in the last 12 months, delivering an average return on investment of 30 per cent’. Could you explain in layman’s terms what this means?

Historically speaking, growth in prices is not linear, ie it is not the same every year – some years they appreciate more, some years less. The average over the past 10 years has been 11.2% per year, however, growth has exploded in the year since the Argyle Mine closed and we’ve seen 30% price growth in the last financial year alone.

How can beginners start to invest?

One of the most beautiful things about pink diamonds is that they are still accessible to a fairly wide audience. While it’s the multi-million dollar diamonds that tend to capture most of the media attention, you can certainly still buy high-quality, investment-grade pink diamonds from a starting point of approximately 20,000 Australian dollars.

That’s one of the reasons why they are becoming increasingly popular with retail investors, and in particular, with SMSF trustees as diamonds are an allowable investment within a self-managed superfund.

What’s been your biggest learning curve so far in such a high rolling business?

While we deal with high-end investors, the majority of our customers are SMSF trustees and retail investors.

The key to our success has been founded on providing high quality, transparent information about pink diamonds and an end to end solution that makes it easy for investors to buy, store, and sell the asset at the other end.

The vibrancy and colour depth of (PD’s) from Australia is said to incomparable. Is it possible to differentiate where pink diamonds in the market right now came from?

Yes – pink diamonds that are both mined and cut by the Argyle Mine will be accompanied by a Certificate of Origin and Authenticity, as well as have a laser inscription with a unique ID number physically present on the diamond itself.

Where do you predict the value of these diamonds to be in 5-10 years?

While each diamond is unique, history provides a guide of where prices will head. If pink diamonds grow by 11% per annum, in line with their long-run average, then a $50k stone will be worth closer to $140k a decade from now.

Continue to grow at 30% per annum as they have for the last year, and that same $50k stone bought today would be worth $689k in ten years, while 20% per annum growth would see the diamond worth just over $300k.

There are no guarantees of course, but given the closure of Argyle, we are confident the next decade will be at least as rewarding as the last ten to fifteen years have been.

Are you aware of any potential locations of consideration to mine for PD’s in Australia again?

There have been no new significant deposits of viable mining opportunities to replace the pink diamonds from the Argyle Diamond Mine. Hypothetically speaking, even if a new mine were to be detected in the future, it takes on average 10-15 years for a mine to reach the point of commercial production.

Last question, do you own a pink diamond?

I do, I am a firm believer in the importance of owning hard assets as part of a diversified portfolio and pink diamonds form an important portion of my own SMSF.

If you enjoyed this story, take a look at what else is trending.