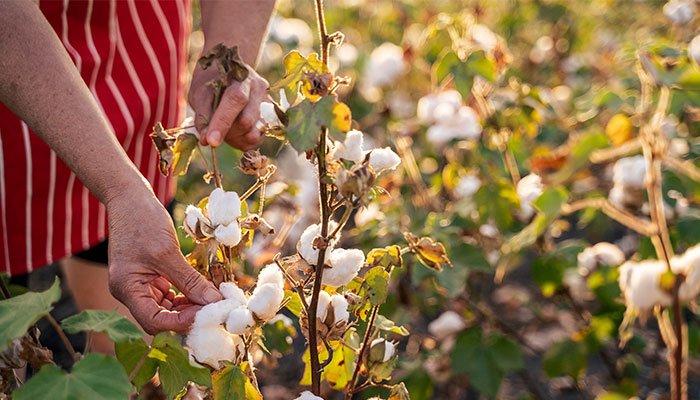 We are all familiar with cotton as a textile and yet few consumers have a clear image of a cotton plant, or the fluffy bolls that are ginned to remove the long fibres and make the final product. Australia is a relatively small cotton producer by world standards but a major exporter of high quality product, generating about $2 billion annually in export income in seasons when climate factors and world prices are favourable.

Commercial cropping of cotton has expanded in recent years from New South Wales and Queensland into Victoria, Western Australia and the Northern Territory. Research and extension for the cotton production and supply chain in Australia are strongly supported by the Australian Government’s Cotton Research and Development Corporation, Cotton Breeding Australia and Cotton Australia.

Records of cultivated cotton go back thousands of years in both Asia and the Americas, so the genetics of the dominant ‘upland cotton’ that is grown commercially today are complex. In addition, there are about fifty highly genetically diverse species of wild relatives of cotton naturally distributed across Africa, Asia and the Americas, and richly represented in central and northern Australia.

Large research and breeding programs in the present-day centres of cotton production such as the USA and Pakistan are critical to developing superior, high-yielding and disease-resistant cultivars. Cotton is largely grown under irrigation in summer throughout sub-tropical and temperate regions of eastern Australia. However, widespread droughts over recent decades have highlighted the vulnerability of our river systems and consequent effects on irrigated crops such as cotton and rice. The impacts of these events for the national accounts are considerable and for local communities, they can be devastating.

As a response, there has been growing interest in cultivating cotton in dryland (non-irrigated) conditions but this raises questions of the impacts of transient water deficits. One consequence of ceasing to irrigate is the greater impact of heat on plants because they transpire less water through their leaves, and flowers are especially susceptible to overheating. Unsurprisingly, the yield of dryland cotton is much less than cotton grown with irrigation.

Extreme and sustained heat imposes a burden on any plant, even warm-climate species such as cotton, but floral development is one moment in the lifecycle of a crop that is especially sensitive to extreme heat (and chilling). We have shown that the ‘male’ pollen grains that fertilise cotton flowers, enabling the long fibres of cellulose to develop, are acutely sensitive to temperatures above 36 degrees celsius, even over periods as brief as five days.

The mean January maximum temperature in Narrabri, a major centre of cotton cultivation, has exceeded 37 degrees celsius in each of the past four years for the first time this century, making the viability of pollen vulnerable. We have shown that at 40 degrees celsius, leaf function is mildly disrupted but pollen grains undergo major damage and boll production is decimated. Often flowers form at these very high temperatures, albeit somewhat smaller than normal flowers, but their pollen is largely sterile.

Breeders have selected for locally adapted cultivars but further progress is required in the immediate future. We now enjoy the benefits of rapidly improving technologies that enable us to interrogate heat-induced events in very specific plant tissues under exacting conditions and at precise times. We have now applied these technologies to pollen development.

‘Molecular technologies’ are especially important as we can now identify proteins and genes that might play a pivotal role in stress tolerance. We have now perfected the use of these technological approaches in samples of pollen weighing a fraction of a gram collected from cotton plants after exposure to heat.

Facilities at Macquarie University’s Australian Proteome Analysis Facility allow us to look for changes in the thousands of proteins found in pollen as it develops under heat stress. We have also analysed the genetic (RNA) sequences that code for these proteins in collaboration with the Ramaciotti Centre for genomics at UNSW. Particular genes and proteins appear in highly time-dependent patterns when pollen experiences heat during its maturation. From this information, we search for markers of key genes with the aim of providing new targets to allow breeders to develop better-yielding crops after heatwaves.

An exciting aspect of our work on heat tolerance builds upon our previous success in rice, where we took local (endemic) wild relatives and revealed variations in critical genes that made these ‘wild rice’ relatives heat tolerant. With the support of an international agri-business partner, we inserted this super gene into rice, paving the way for the development of heat-tolerant rice. We have very encouraging findings from Australian wild cotton relatives native to hot, dry landscapes of central Australia so, by analogy, we hope to find partners to identify heat-resistance genes from wild cotton.

The improvement of major crops by use of genetics derived from wild relatives is a burgeoning field of research into physical stresses such as heat. Looking to wild plant populations has long been central to disease resistance so we are now optimistic that with support for our research, we can emulate the achievements in disease resistance and develop cotton crops better adapted to a wide range of growing conditions.

This article was written by Professor Brian Atwell, head of The Atwell Lab at Macquarie University’s Department of Biological Science.