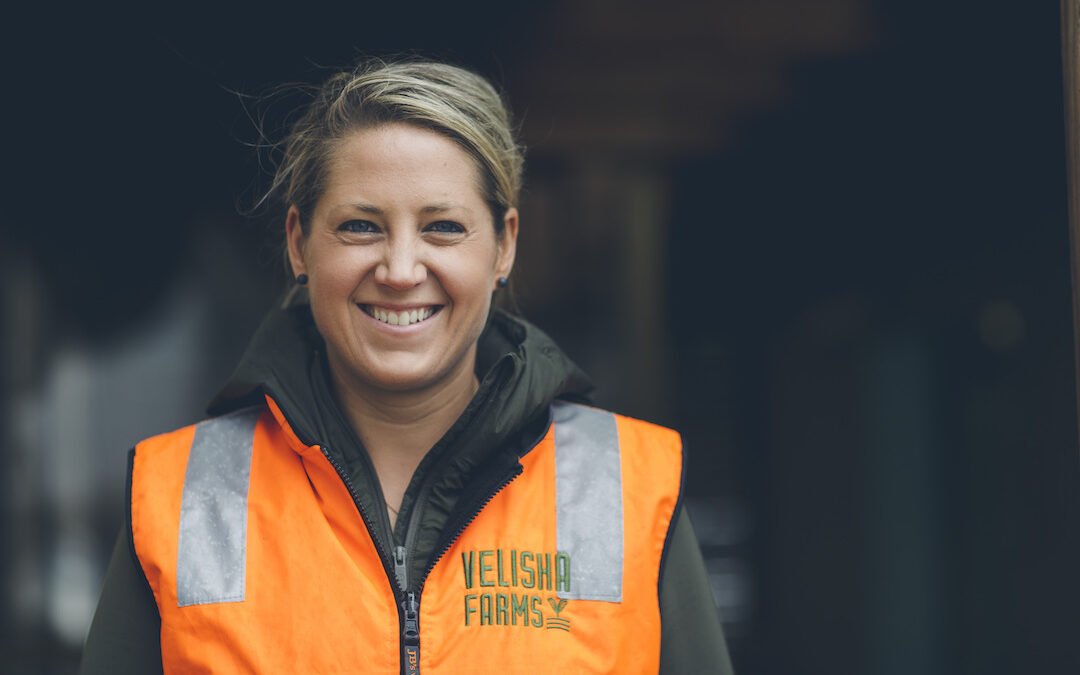 Catherine Velisha, the managing director of a thriving Werribee horticulture business, is on a mission to inspire the next generation of female farmers.

In both senses of the word, Catherine Velisha is an Australian pioneer. At just 35 years old, she is chartering a heavily dominated male industry as the managing director of her successful horticulture business, Velisha Farms in Werribee. She’s also on a mission to buck trends and crush clichés by partnering up with the Victorian Farmers Association to inspire young girls to join the agriculture industry. Through her lens, future for female farmers looks bright.

Catherine can’t imagine a life not outside, but she understands most women are pigeonholed from a young age; conditioned to assume they shouldn’t have to get their hands dirty to make a dollar.

The history of the female Australian farmer has only been officially written for the last twenty- five years. Prior to 1994, Australian women were not allowed to list their legal status as a “farmer” and were instead dismissed as “domestics” or “farmers wives”.

No doubt before the change, there were Australian women helping on farms. They would have been unpaid, unappreciated, and under-rated. Although it’s been two decades since the official existence of female farmers, the same stereotypes remain. Catherine believes two decades has already been too long.

“When people think of an Aussie farmer, they almost always visualise a man. We want to crush that cliché in the classroom,” says Catherina.

Figures from the 2016 Australian census revealed that only a third (32 per cent) of agricultural workers were female. How does Catherine plan on improving these numbers?

By getting young girl’s hands dirty. “You can’t mimic what you can’t see. We want these young girls to feel inspired and then the rest will come naturally,” says Catherine.

Catherine brings primary school children on hand-ons excursions, immersing them in living classroom experiences where they engage in educational games and interact with the surrounding horticultural environment.  The children learn about the process of planting, growing, harvesting, picking, packaging, and distributing fresh produce. Most importantly, they see women too getting their hands dirty along the way.

“There are so many incredible women leading the industry, yet we rarely hear their stories. Rather than waiting for the day for men to let us speak, we are putting ourselves on our own stage to inspire young women.”

The aim of the excursion is to, “change the outdated perceptions that surround the horticulture industry.” The ‘old man on the tractor’ stereotype puts shutters on the whole industry for girls, the excursion opens them up and shows there’s more to the agriculture world than simply sitting on a tractor all day.

Dispelling myths in the media

Another misguided perception Catherine and Velisha Farms’ Head of Education Mark Pullin are set out to squash is the scarcity mindset of agriculture. Farmers are typically covered in the news only when something is going wrong, such as floods or drought. And so, children are taught farming is a tough life, where you are always at the mercy of harsh weather.

“The industry can only grow if we grow with it,” says Mark.

“From logistics to management to artificial intelligence, we want to show young people that the career opportunities are growing, and that they are vast. It’s a myth our industry is struggling, the truth is rather the opposite.”

The program is only in its infancy and it’s already presenting promising signs. Students from the School of the Good Shepherd, based in Gladstone Park, recently spent the day touring Velisha’s facilities entering cool rooms, weighing veggies, and cataloguing crops.

Their teacher, Sarah Cornish, says the power of the program comes from its wide scope of activities, as the children were engaged in several rotations to show the varying produce farmed in the area.

“Sustainability is an emerging cornerstone value at our school, so it was an extraordinary experience for students to not only understand the how and why farms like Velisha operate but also to ponder questions like “are there more sustainable practices farms and supermarkets alike could be investing in?” says Sarah.

The project is supported by the Government’s ‘Educating Kids About Agriculture’, a program under the Liberal and Nationals Government’s ‘Our Plan to Showcase Agriculture: Our Heritage Our Future’ scheme, which aims to boost career interest within the sector. A promising sign for the program’s sustainability.

Catherine recently took out the National Women in Horticulture Award at the Hort Connections National Awards this month. She is becoming a role-model for young girls, a role-model she would’ve looked up to when she was younger.

Check out these inspiring reads:

Why it’s crucial to encourage kids to be more creative

This couple created an app that every parent needs